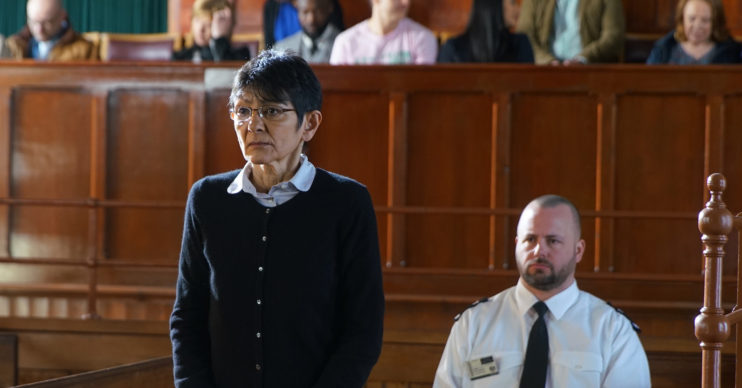 Yasmeen is currently in prison and could be awaiting a trial

Coronation Street could be building a courtroom set for Geoff and Yasmeen’s upcoming scenes as filming on location is banned.

At the moment, Yasmeen is in prison for stabbing her abusive husband geoff in the neck. In recent scenes, she plead not guilty to attempted murder meaning there is a huge change we will see the case go to trial in court.

However due to the coronavirus pandemic, filming on location has been banned and cast and crew must keep a two metre distance from each other.

But Corrie bosses have revealed they have a way to deal with courtroom scenes, should they need to film them.

Speaking about social distancing measures to Entertainment Daily and other press on a virtual press conference, Corrie boss Iain MacLeod said: “We’ve got it all nailed down so we’re fairly confident we’ve minimised risk. We thought it was much safer to keep things on set.”

ITV’s Head of Soaps and Continuing Drama John Whiston added: “What’s fantastic is that we have our own craft shop and our own design department.

What’s next for Yasmeen and Geoff

In next week’s episodes, Sally refuses to sit with Geoff and Tim in the Rovers. It’s starting to become extremely clear, she doesn’t believe Geoff side of the story.

An angry Geoff later confronts his daughter-in-law at the factory and tells her she’s forcing Tim to choose sides.

He then menacingly says that the stress is too much for him and Tim, telling her it could kill him.

Later Geoff tells Faye that Sally has kicked him out and taken Yasmeen’s side. Faye is furious and confronts her dad and stepmum.

She soon packs her things and says she’s moving in with Geoff. Tim’s left furious with Sally, meanwhile Geoff pretends to be sympathetic.