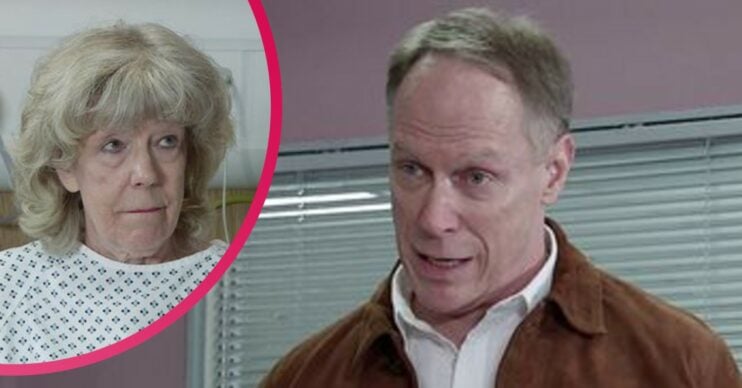 The businessman is back - but fans are seriously distracted

Coronation Street fans have all been saying the same thing after Stephen Reid returned.

The businessman made his cobbles comeback after 15 years away, with actor Todd Boyce reprising the role.

In Friday night’s episode (June 24), Stephen found his mother trapped in the barbers under the fallen motorcycle.

He and passing Elaine Jones summoned an ambulance and Audrey was rescued and rushed to hospital.

Stephen, my gorgeous son. I kept thinking I saw your face. I think I must be dreaming.

There, Stephen clashed with his sister Gail about what had been going on with Audrey – until the nurse revealed Audrey was awake.

Coming to after her major surgery, Audrey couldn’t hide her joy at her firstborn returning.

She said: “Stephen, my gorgeous son. I kept thinking I saw your face. I think I must be dreaming.”

“I’m here,” he replied as Gail tried to ask Audrey how she was feeling.

But Audrey wasn’t happy to see her daughter.

“What are you doing here, eh?” she raged.

“Hoping you’d seen the last of me, right? Off the famous to do list. Disappointed that I’m not pushing up the daisies.

“Don’t you start pretending to care.”

And then Audrey made a shocking move, telling Stephen: “I’m not strong enough to have her here Stephen. Just go, go home Gail.”

Gail was left heartbroken by her mum’s rejection and walked out of Audrey’s hospital room in tears.

But fans were too distracted by Stephen’s accent to notice.

One said: “Stephen not wasting any time in showing off his vocal range.”

A second said: “WTF is that accent #Corrie.”

A third said: “Okay his voice is going to irritate the [angry face emoji] out of me, please don’t give him many lines lol.”

Another said: “Uuum! Stephen’s acting is a bit OTT. You’re not in Dynasty mate.”

Stephen is Audrey’s first child – however her parents forced her to give him up for adoption.

He was adopted by Malcolm and Joyce Reid with the family moving to Canada, leading to his accent.