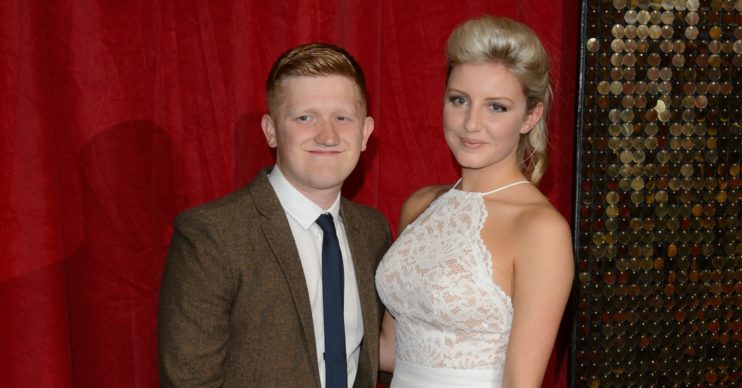 Coronation Street star Sam Aston’s wife, Briony, has revealed the sweet way she told him he was going to be a dad.

Sam, who plays Chesney Brown in Corrie, and Briony recently announced they are expecting a baby boy.

And now, Briony shared how she told her husband they were going to be parents.

In an Instagram post, she shared a picture of egg and toast on a board which says: “Daddy you are a good egg. All my love bumble bee xx.”

Above the breakfast dish was a Clearblue pregnancy test.

Briony captioned the post: “Sat waiting for my next midwife appointment and reminiscing over when our incredible journey started (the morning I woke up at 3am and had to wait till breakfast to tell Sam.”

Her followers commented on her post, sending their well wishes.

One wrote: “What a lovely photo this story tells.”

A third added: “Oh wow, congrats to you both.”

The couple also spoke about the reveal to OK Magazine.

Briony said: “We hadn’t been trying for long but I bought a board you serve eggs on which had ‘daddy you’re a good egg’ etched into it. I wanted a nice way to tell Sam when I did fall pregnant and I always make him dippy eggs.

“Luckily for us, as soon as I could do my first pregnancy test, it was positive.”

Sam added: “I came down for breakfast and the fire was on, the highlights of Match of the Day were on TV; it felt like it was my birthday!

“Briony put the board down and I started eating and I didn’t even notice the message, as I was too busy watching Burnley play.

“After a few minutes I saw it and was so excited. I kept saying ‘really?’ It was very surreal.”

As well as revealing the news to Sam, Briony has also shared how she told her parents.

On her Instagram story, she posted a picture of herself, Sam and her mum and dad playing the headband guessing game.

In the picture Briony and Sam are wearing “Mummy” and “Daddy” on their headbands. Meanwhile Briony’s mum and dad have one which says “Grandma” and “Grandad.”

Alongside the picture she wrote: “This is how we told my parents they’re having their first grandchild.”

She then played a video which showed the moment they realised what the headbands said.

Briony’s mum was shocked but they all appeared to be over the moon by the news!