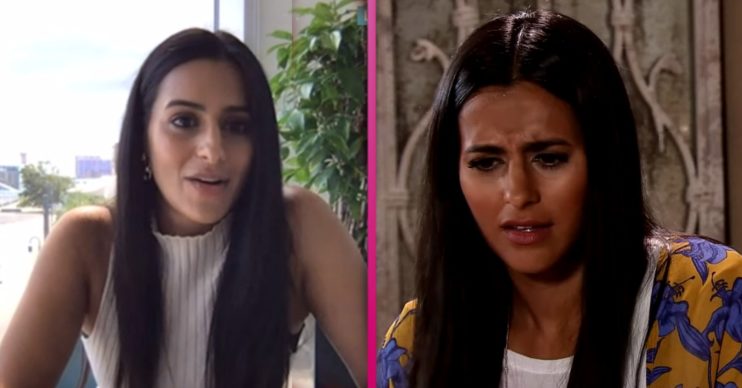 Coronation Street actress Sair Khan has explained how her alter ego Alya could have been ‘damaging’ Yasmeen’s situation as she tried to help her escape Geoff.

Currently Yasmeen is in prison awaiting trial for attempted murder after stabbing abusive husband Geoff. However her granddaughter is determined to help her and set her free.

Alya spotted the signs of abuse before Yasmeen attacked Geoff in self defence and desperately tried to get her to pack a bag and leave him.

But actress Sair explained that although Alya is trying to help her gran, she could have actually been doing damage.

Speaking on This Morning about working with charity Women’s Aid, the actress said: “We spoke to them, they came in and had a chat with us just to talk about the complexities of coercive control and what happens with real-life stories.

“I think for me it was particularly interesting because Alya, there’s been examples of her rushing in there, having a bit of a hero complex, thinking that she knows what’s best for her gran and that she just needs to pack a bag and get her out of there.

“But actually that can be really damaging to someone who is stuck in a relationship like that.”

Although Yasmeen is currently in prison, she was recently visited by a woman named Elaine, who revealed she is a former partner of Geoff.

In Monday night’s Coronation Street (July 27) Elaine revealed to Alya that she was married to Geoff for two years.

Like Yasmeen, he also abused her and she ended up fleeing in order to save her life. But she told Alya that she had to leave behind her son Tim.

How will he react when he finds out the truth? And will Elaine be able to help Alya free Yasmeen?