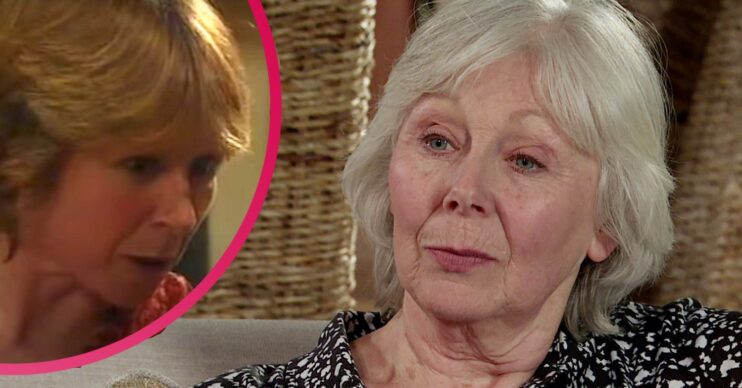 Coronation Street star Roberta Kerr: Who did she play in Emmerdale?

She's back on the cobbles as Wendy Flamin' Crozier, AKA Wendy Papadopoulos, but she's also known for her years in Emmerdale

Coronation Street star Roberta Kerr is back on the cobbles as the legendary Wendy Flamin’ Crozier – now called Wendy Papadopoulos.

But soap fans have also been remembering her role in Emmerdale, where she played feisty matriarch Jan Glover – who was even bold enough to take on Kim Tate!

Roberta Kerr’s acting career began in true soap style with a role on C4’s Brookside where she played a character called Sally Haynes.

She went on to play roles in various television shows and on radio, including troublesome Mo Travis in The Archers.

Mo tried to seduce Neil Carter while wife Susan was in prison – obviously inspired by her role as the seductive Wendy Crozier in Coronation Street.

In 1989, Wendy got close to Ken Barlow when she worked for Weatherfield Council and leaked important info to Ken who was a reporter at the time.

The pair began a steamy affair that ended with Ken losing both wife Deirdre and his job! But though he tried to make a go of things with Wendy, the pair eventually split when Ken admitted he still loved his wife

After she left Coronation Street, Roberta landed the part of Jan Glover in Emmerdale in 1994.

Who was Jan Glover?

Jan Glover was a barmaid at The Woolpack, and mum to Dave, Linda and Roy. She was married to Ned Glover, who was an old enemy of Zak Dingle.

Her son Dave had a steamy affair with Kim Tate, and when Kim’s baby James – now Jamie Tate – was born, there were rumours that Dave was his dad.

A DNA test proved he was actually Frank’s son, but that didn’t deter brave Dave running into the flames when Home Farm was on fire and rescuing the little lad.

Sadly, though, Dave was killed and Jan was devastated to lose her first born son.

Just a year later, there was more heartbreak for the Glover family when daughter Linda was killed in a car accident.

Poor Jan had a breakdown and became convinced that Kim was to blame for the deaths of both her children, and that baby James was her grandson.

She abducted the baby but fortunately he was found safe and well. Jan was sectioned. After she recovered, she left the village for good.

The return of Wendy Crozier

Coronation Street star Roberta Kerr returned to the cobbles in 2012.

Wendy – who was now Wendy Papadopoulos having been married and widowed since her time on the Street – came back to Weatherfield.

Ken was reunited with his old flame when he became a school governor at Bessie Street and discovered Wendy was a governor, too.

Deirdre was, not surprisingly, suspicious. And Wendy told her she and Ken had rekindled their romance!

But it turned out Ken’s friendship with Wendy, was just that – friendship. Wendy had lied. Ken told Wendy he didn’t want to see her again.

But now she’s back!

He had several small roles in Corrie in the 80s and 90s and runs a theatre company.

For many years he played Kenton Archer in The Archers.