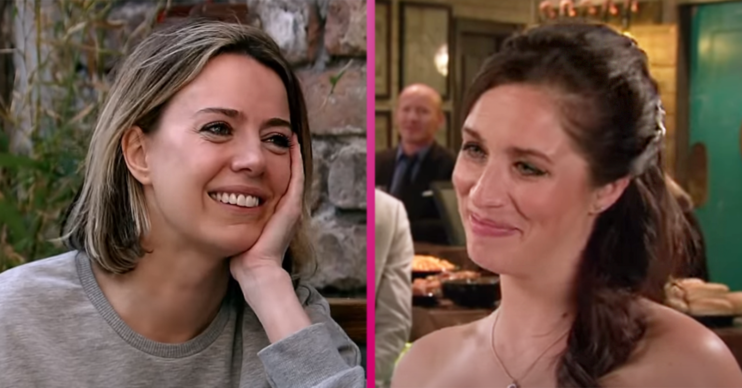 Shona Platt is returning to the cobbles next week

The Corrie star has opened up as her alter ego prepares to return to the cobbles with no memory of her time there or her marriage with David Platt (Jack P. Shepherd).

The 35-year-old star has now said if Shona and David can’t get their marriage back on track, she wouldn’t rule out a romance with Sally Carman’s character.

She said: “I would love to rekindle the relationship she has with Billy [Mayhew]. As you all know, Dan [Brocklebank] is a very good friend anyway.

“But I like Billy and Shona’s relationship because he helps her, and she is cheeky with him and stuff. Romance wise, [David] is all I’ve ever known on the street.

“Potentially, I would love to work more with Sally Carman. So maybe we could look into maybe making a ‘Shabi’ – Shona and Abi – relationship.

“But I think she is quite busy with Kevin [Webster].”

Julia was back on set four a few weeks before lockdown started amid the coronavirus pandemic. She was delighted to get back to work, but she is loving the opportunity to be spending time with her family.

Maybe we could look into maybe making a ‘Shabi’

The soap star and her husband Ben Silver welcomed their son Franklin into the world in November last year and she is making the most of their “extra time” together.

“He’s just got his first two bottom teeth and he’s starting to eat and stuff. He’s a delight. He really is.

“Even if he’s not sleeping properly, which generally he does, but he’s always absolutely delightful. He makes my life so much. He’s five months old. It’s ridiculous.”

She also admitted that being a mother helps her relate to Shona’s struggle.

Shona has brain damage and can only remember her son Clayton as a youngster.

Julia said: “I’ve tried to imagine waking up and seeing Franklin being 10 years old, with no memory.

“I keep thinking how distressing that would be to lose those years. Now I am a mother it has put me on another level.”