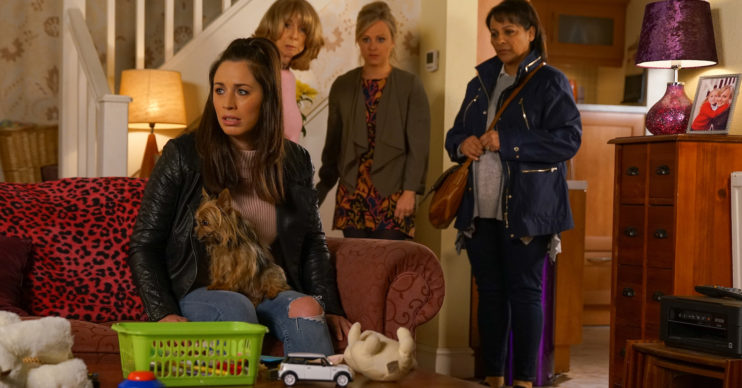 Shona will be back on screens next week

Coronation Street star Julia Goulding has revealed Shona has undergone a ‘physical change’ as well as a mental one since she’s been away.

Shona has been battling with her recovery ever since she was shot at Christmas and suffered brain damage.

She can’t remember anything about her life in Weatherfield, not even husband David Platt.

She’s more grungey and heavier with eye make-up and the Doc Martins are still there.

Shona is different when she returns to Coronation Street

As she returns to the cobbles for the first time since her life-changing injuries next week, Julia has revealed Shona has gone back to her old style in terms of her appearance.

Speaking to Entertainment Daily and other press during a Zoom Q&A, Julia revealed: “She’s still Shona underneath. The essence of her is still there as is her fashion sense.

“I spoke to make-up and costume and we discussed taking her back to the Shona we first met three and half years ago.

“She’s more grungey and heavier with eye make-up and the Doc Martins are still there. She’s not an Ugg boot wearer, she’s sturdier than that!

“It lets the audience know which Shona they’re receiving.”

Of her relationship with David, Julia admitted it will be an uphill struggle for them to get back on track.

“She has no idea who he is – she feels very indifferent. She has no recollection so she’s quite scared,” Julia said.

“David is very familiar with her and she’s been told she’s married to him but she has no idea.

“Shona still believes that she lives in the Dog and Gun Estate. Suddenly being plucked from what you remember and landing in this Street with people you don’t know but they know you it’s really daunting. She doesn’t warm to it.”

Can Shona and David make it work?

The actress also told how the Shona we knew won’t be the same emotionally, either.

“It will potentially come across like she is being cold and mean to David but it’s not that.

“That’s where it goes from 1 to 100 in seconds. The bouncy Shona we used to know may not be as bouncy.”

But Julia did say she is really hoping they fall back in love.

“They’re starting from scratch and he has an uphill struggle as she is really stepping back from him.

“I think it will require a lot of teamwork from them.

“It will be lovely to see them fall back in love starting from a very plain ground. I’m looking forward to it, it’s quite nice.”

And if it doesn’t work out, Julia knows exactly who Shona should be paired up with next: Abi Franklin!

“I would love to work more with Sally Carman,” she said. “So maybe we could look into maybe making a ‘Shabi’ – Shona and Abi – relationship.”