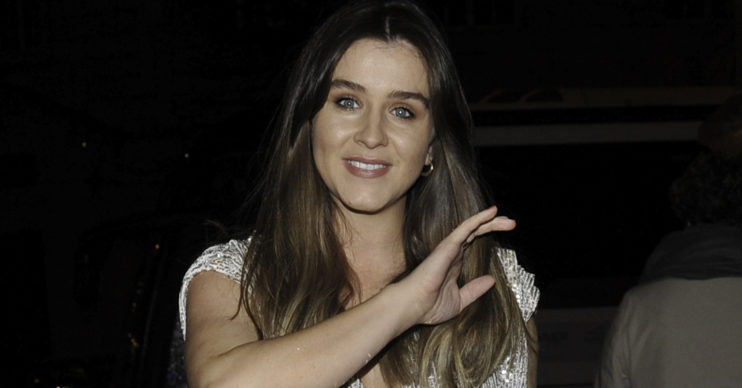 Taking to social media, she shared a lovely snap of Mexx enjoying the heatwave.

Paddling in an inflatable pool, Brooke shared the photo with her Instagram followers.

Captioning the pic with a heart emoji, many of her WAG pals and Corrie costars commented on the sweet post.

When did Brooke Vincent become a mum?

Soap star Julie Goulding wrote: “He’s so beautiful Brooke” along with a series of heart emojis.

Elsewhere on her ‘Gram’ Brooke posted a lovely tribute to Mexx on her stories.

Sharing another pic of her little one enjoying the sunshine, she penned: “How are you one in two months.

“I could actually cry. When they say, ‘Enjoy it, it goes so quick” they really weren’t lying.

“Standing up and nearly managing to clap my clever little boy.”

She is expected to return to Coronation Street at some point this year.

She initially said she was going on maternity leave for 11 months and hinted that she wasn’t gone for good.

This May she answered a fans question during an Instagram Q&A.

When is Brooke Vincent returning to Coronation Street?

She was asked when she will return to the cobbles as Corrie favourite Sophie Webster.

Brooke candidly replied: “I’m not too sure yet, as I didn’t take typical maternity.

“I’ve been on Corrie since I was 11 so it’s nice to have some time to be with my new baby and in our new home before going back.

She first joined the soap as Sally and Kevin Webster’s youngest daughter back in 2004.

Sophie’s been the centre of several huge storylines.

Over the years we’ve seen her convert to Christianity, come out as a lesbian and her humorous sibling rivalry with her sister Rosie Webster.