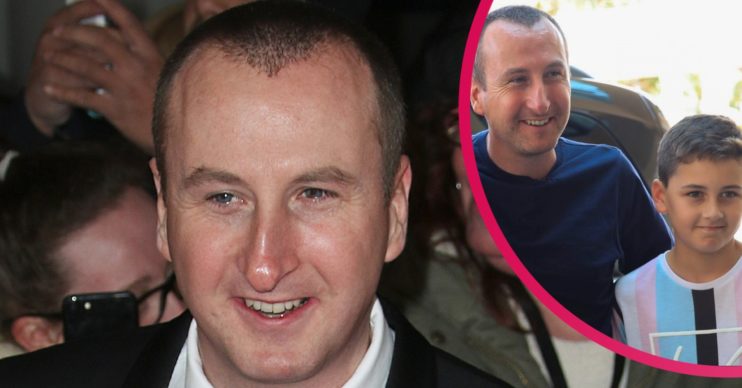 The Kirk Sutherland actor can't believe how grown up his son is!

Coronation Street star Andy Whyment has shared a throwback picture alongside a current one as his son prepares to leave primary school.

Andy, who plays Kirk Sutherland in Coronation Street was full of pride as his eldest child, Tom, gets ready for senior school.

He captioned the side-by-side snaps with: “Tom’s first day at primary school in September 2013 to his last day in uniform wearing his leavers hoodie.

Read more: Coronation Street’s Yasmeen to die ahead of trial?

Fans began to comment on the post and polite Andy sent many replies, thanking them for their kind words.

He also confessed to one that he would be ‘in bits’ when Tom’s first day at high schoool comes around.

The follower wrote: “My daughter is starting high school in September too. I’m more nervous than she is! I’m going to be in bits on her first day.” Andy replied: “I think we all will.”

Another fan commented that her daughter is really excited about leaving primary school and Andy said: “Tom’s the same, bless him.”

He added other comments such as: “Very proud of him,” and “It’s mad how quickly it’s gone.”

A couple of people commented how tall Tom was going to be, and Andy agreed: “I know! It won’t be long before he’s towering over me!”

How many children does Andy Whyment have?

Andy and his wife Nichola have two children.

The couple have been together for 15 years and got married in 2007.

Thomas is their eldest child and he is 11. They also have a nine-year-old daughter called Hollie.

Keeping us entertained in lockdown

Like the rest of the Coronation Street cast and crew, Andy stopped work when the country went into lockdown.

But he’s kept his social media fans constantly entertained with videos of him and his family dancing.

Many have said he’s been just the tonic they’ve needed to get them through the dark days.

It took Tom a while to agree to join in with the family vids, but he eventually did and became the star of the show!

Andy is now back filming at Coronation Street, but although he’s shared an image of his script, he’s given no hints as to what Kirk’s latest storyline might be.