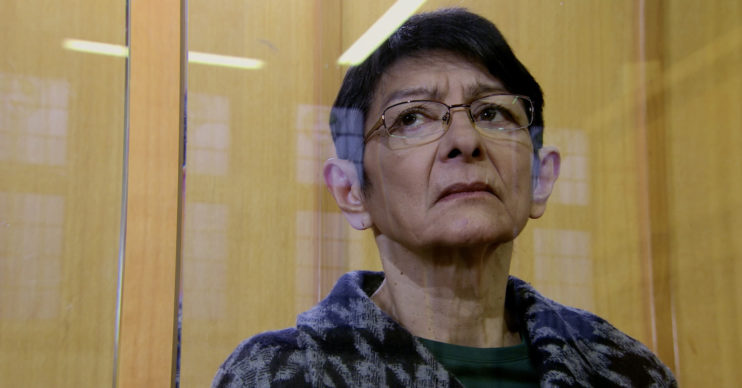 Coronation Street SPOILERS: Yasmeen takes to the stand – but what will she plead guilty?

Will Yasmeen tell the court the truth about Geoff's abuse?

In next week’s Coronation Street, Yasmeen takes to the stand. But what will she plead?

After stabbing abusive husband Geoff in self-defence, Yasmeen was refused bail. But previews reveal that next week is her plea hearing.

In the courtroom, Alya watches nervously as it’s time for her gran to plead her case.

But will she plead guilty or not guilty?

Meanwhile, Sally tells Tim she wants Geoff to move back to his own house, regardless of how guilty Tim feels.

Is Sally starting to see her father-in-law’s true colours?

What happens in this week’s episodes?

This week, the police arrive and order Alya to hand the keys over to Geoff.

Knowing there’s nothing she can do, she throws the keys at him.

As soon as he can, Geoff retrieves the his hidden camera. The radio DJ the deletes the footage of their final argument. But when Tim suddenly appears, will he be forced to explain himself?

Meanwhile, Imran confides in Alya he has been through Geoff’s bank statements and discovers he has been going to a hotel bar in town.

Yasmeen reluctantly admits her husband has been hiring escorts. Alya’s shocked but pleased they may have some evidence to help Yasmeen’s case.

But her mood soon changes when she learns her gran intends to plead guilty.

Meanwhile, Sally suspicions of Geoff are growing. After speaking to Alya, Sally is disgusted to learn Geoff about hiring escorts.

Tim is in disbelief but his dad’s obvious discomfort gives it away.

As he realises the truth will come out in court, Geoff admits to paying for women but lies about his reason for doing so.

He claims that he only hired them as his wife refused to have sex with him.

Sally is disgusted but Tim stands by him. He reckons it can only help Geoff’s case as it gives Yasmeen a motive to try and kill him.

Geoff goes to the police to reveal this, leaving Alya worried she’s played straight into his hands

When Yasmeen tells her granddaughter that Geoff gave her an STI, Alya is horrified and begs her to expose Geoff for what he is and to tell the truth in court.

But will Yasmeen listen to her granddaughter?