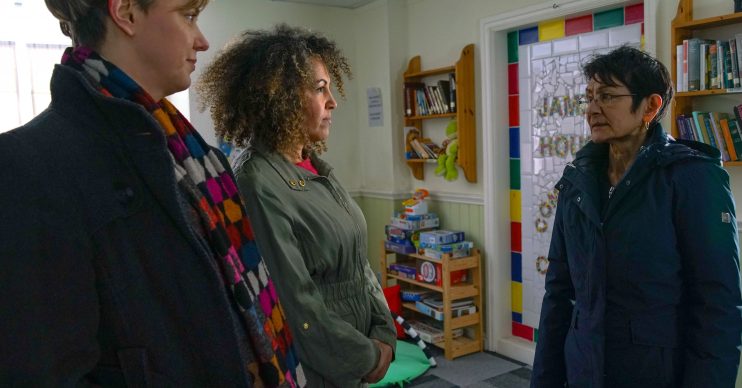 Coronation Street SPOILERS: Yasmeen finds out about Geoff’s past tonight

Geoff has been abusing Yasmeen in a coercive control storyline

In tonight’s Coronation Street, Yasmeen finds out more about Geoff’s past as she meets with the police.

In a clip shared on the Corrie official Twitter page, it shows Yasmeen going to meet police officers in order to get information under Clare’s law.

TONIGHT at 7.30pm
Yasmeen secretly meets up with two police officers to talk about Geoff’s criminal past…

Yasmeen asks what happened with Geoff and his ex-girlfriend when they were arrested for affray.

The police officer tells her that a pub landlady called the police as Geoff and his girlfriend, Ms Walkie, got involved in a domestic incident.

When Yasmeen asks who started it, the police say reports were conflicting, however the charges were dropped.

But that’s not the only thing Yasmeen learns. She finds out Ms Walkie complained to the police before the incident, saying she was being harassed by Geoff.

The officers gently ask Yasmeen if she’s afraid of Geoff, but she says she doesn’t know and that her husband can be intense.

Although the police offer to take the Speed Daal chef to a safe place, she declines saying she wants to think about things before making any decisions.

Will Yasmeen confront Geoff about his past?

She soon discovered he had lied about booking a hotel for them so they could attend Zeedan’s wedding in Spain and found out he had been emailing an escort agency.

When Yasmeen left to attend her grandson’s nuptials alone, Geoff desperately tried to stop her from leaving the house.

Geoff reeled her back in by making her believe he was going to take his own life.

How will Geoff and Yasmeen’s storyline end?

Although it hasn’t been confirmed how the storyline will conclude, it has been reported that Yasmeen will be arrested for attempted murder.

The next episode of Coronation Street airs tonight (Wednesday, April 8) at 7.30pm.