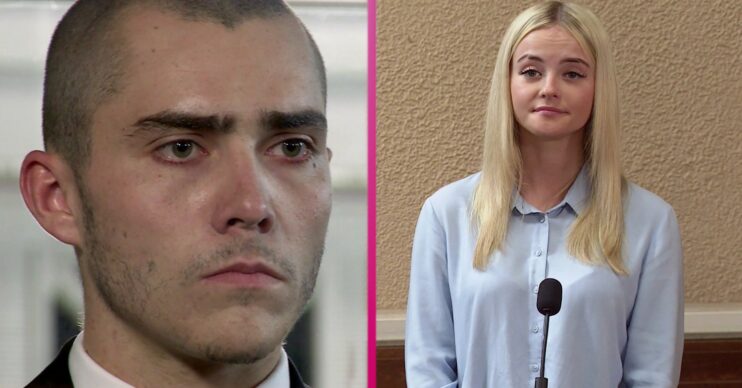 Seb and Nina were attacked earlier this year

In tonight’s episode of Corrie (Wednesday, September 1) Corey and Kelly’s trial for the murder of Seb Franklin began.

Earlier this week, Nina went back to the scene of the crime and was able to remember what happened the night she and Seb were attacked.

She remembered that Corey was the one who kicked Seb and Kelly tried to stop him.

In tonight’s episode, Nina gave her new statement to the police.

Meanwhile the trial began and Nina was questioned about what she remembers.

Later Corey’s ex-girlfriend Asha went into the witness box and recalled how Corey asked her to lie to the police.

It was brought up how Asha had previously stripped for Corey and Kelly shared a video of it, and Asha’s past relationship with Nina.

Imran questioned Asha, quizzing if she was still in love with Nina and if that was the reason Corey and his friends went after her and Seb.

But what is going to happen next?

In Friday’s episode (September 3) Abi rails at Stefan outside of court and suggests it’s time Corey starts telling the truth.

Corey takes the stand and lies through his teeth, claiming Kelly attacked Seb as he tried to stop her.

Soon Corey paints himself as the victim, telling the court how Kelly’s dad is a gangster an she threatened to have him killed if he reported her to the police.

As the trial continues, Imran suggests to Eli that he’s lying about Kelly to get a reduced sentence himself.

Outside Court, Abi launches a verbal attack on Stefan, accusing him of trying to buy Corey’s innocence with bribes.

Determined, Abi searches through his social media accounts. Will she find anything?

Next week Kelly takes the witness box and tells the court how Corey attacked Seb and kicked him repeatedly, despite her begging him to stop.

Soon Kelly’s mum Laura takes the stand and claims Kelly is the model daughter and would never have hurt Seb.

As the trial comes to an end, Imran and Sabeen deliver their closing speeches.

With the jury out, Imran is still fighting to prove Kelly’s innocence, while Abi is desperate to unmask Corey for the killer that he is.

Abi intends to find some proof that Stefan bribed a witness, but Kevin wishes she’d leave it to Imran.

Back in the court the verdict is in, will justice be served?

Later, back on the street, the residents discuss the verdict. Meanwhile there’s shocking news from the prison.