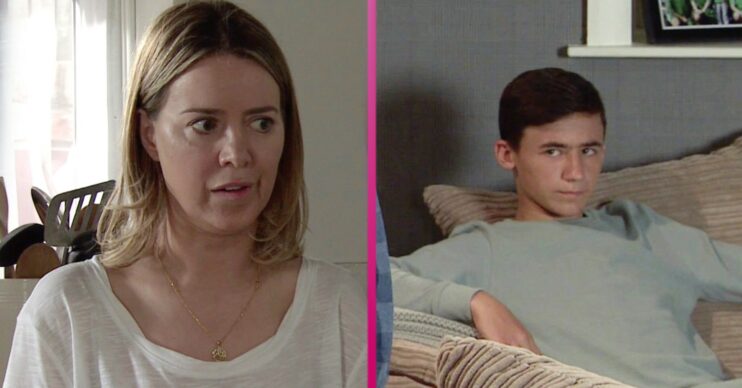 Coronation Street spoilers for tonight reveal Corey‘s identity is leaked online which could affect the trial.

A worried Abi tells Kevin she’s heard whispers that Tommy Orpington has been lined up as a character witness for Corey.

Sabeen calls on Imran and suggests they ask the court to take account of Kelly and Corey’s ages during the trial as it could benefit them both.

Sally assures Jack that Tommy wouldn’t support Corey if he knew the truth.

Soon Abi’s liaison officer Alison talks to Kevin about the trial next week and she scoffs at Kelly and Corey having their identities protected.

Toyah’s dismayed when Simon reveals that Corey’s identity has been leaked online on a Tommy Orpington fansite.

Later Abi is devastated to learn Corey being named online could jeopardise the trial.

Meanwhile Imran volunteers Toyah to sit in court with Kelly. The police call to speak to Jack about the online posts.

Abi accuses Imran of using Jack’s mistake to delay the trial and Toyah is shocked that is exactly what he’s doing.

He vows that no matter how unpopular is makes him, he will stop at nothing to win.

Ronnie urges Michael to come clean to Grace and admit that he doesn’t love her. Knowing he’s right, Michael dreads the inevitable fallout.

Grace declares she will only stay in Weatherfield if they give her the house they’re renovating as she can’t stay at No.3.

Maria on a mission

Sally is chuffed when Maria tells her she was wrong for dismissing her concerns about the parking problem and volunteers to support her campaign.

Maria speaks to Sarah about getting rid of Underworld’s van to help the environment.

Sarah is annoyed by her actions and tells her to stick to hairdressing.

Maria tells Gary she’s selling their car and wants him to get rid of the work van. But what will he say?

Will Jenny listen to Daisy?

Ronnie gets all dressed up and invites Jenny out for a meal. However she’s preoccupied by a blocked toilet in the pub.

Soon Daisy tells Jenny she thinks she will regret turning down Ronnie’s invitation and should give him a chance. Jenny wonders if she’s right.

Later Ronnie presents Jenny with flowers and she levels with him, saying she isn’t ready to be swept off her feet.

Daisy tells Jenny to just admit she fancies Ronnie and crack on.

Meanwhile James receives confirmation in the post that his case will be reinvestigated by police.