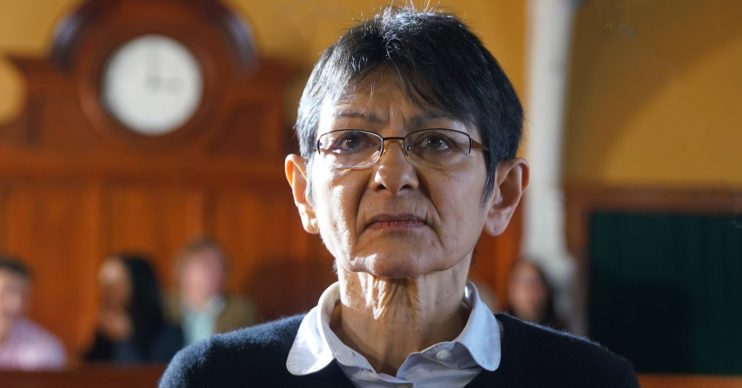 Coronation Street SPOILERS: What happens next as Yasmeen pleads not guilty?

Yasmeen starts to reveal the truth

In next week’s Coronation Street, Yasmeen pleads not guilty. But what does that mean? And what will happen next?

Last month, Yasmeen was forced to defend herself when her abusive husband Geoff threatened to kill her. But after she stabbed him in the neck, she was charged with attempted murder and has since been refused bail.

Meanwhile, Geoff is back at home and Alya is desperately trying to make people see that her gran was being abused.

In next week’s episodes prior to Yasmeen’s plea hearing Alya goes to visit her and is shocked and upset when Yasmeen finally tells her about what Geoff put her through.

She tells her about Geoff getting her to eat her own chicken and forcing her to continually clean.

Horrified Alya tries to make her see the truth about Geoff, but she doesn’t know if she’s done enough to get through to her gran.

Whilst waiting to enter her plea, Yasmeen rings her granddaughter and tells her she’s worried how Geoff will react if she pleads not guilty.

Alya is concerned to see how deep Geoff’s control and influence is over Yasmeen.

Meanwhile Sally tells Tim she’s not sure of her father-in-law’s innocence and wants him to move out.

As the court convenes, Alya is delighted when Yasmeen pleads not guilty. Back on the street, Geoff is furious and tells Tim they need to show a united front.

Sally tells Tim she wants Geoff out, forcing him back to No.6.

Tim feels bad but when Eileen says she also isn’t sure about Geoff’s side of the story, the taxi driver starts to wonder if Geoff really is innocent.

What happens next for Yasmeen?

When someone is charged with a crime, they can either plead guilty or not guilty. This takes place at a plea hearing.

If the defendant pleads guilty, the case won’t have to go to trial and the person will be given their sentence at a later date.

However if a person pleads not guilty, like in Yasmeen’s situation, the case will go to trial in the Crown Court before a jury.

Whoever is on trial will almost certainly have a lawyer to defend them. It is then down to the jury to decide if the defendant is guilty or not.

Yasmeen admitted she ‘killed her husband’ when she initially called the emergency services, meaning her case will be hard to prove.

But lawyer Imran is doing all he can to help. And if Alya can keep getting her gran to admit what’s really been going on, Yasmeen’s case could be strengthened.

With Sally edging closer to the truth, and both her and Eileen seemingly on Yasmeen’s side, Geoff’s downfall could be beginning.

Is Sally the key to Yasmeen’s freedom? Or is she facing a lengthy sentence inside?