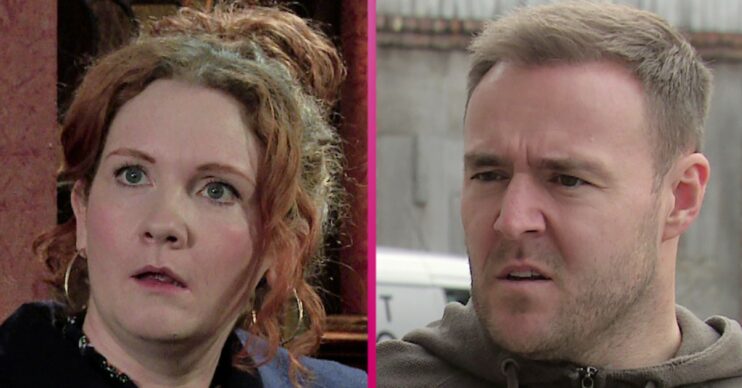 Coronation Street spoilers: Tyrone tries to win Fiz back as she quits the cobbles?

Tyrone is sad that Fiz is going

Coronation Street spoilers for next week reveal Fiz moves away from the cobbles.

Meanwhile Tyrone struggles with Fiz’s decision, but is all as it seems?

Last year, Fiz met Phill shortly after Tyrone left her to be with Alina Pop.

Alina and Tyrone’s relationship didn’t last, but Fiz and Phill’s romance appears to be going strong.

The couple decided to buy a house together, but it meant Tyrone would need to sell No.9.

Next week, as Fiz packs up the van, she confesses to Tyrone that she is worried she’s making a huge mistake moving somewhere new.

But Tyrone just wants what’s best for her and tells Fiz she deserves a fresh start in a big house with a garden for the girls to play in.

He waves Fiz off but his smile is hiding his heartbreak.

Later in the factory, Beth and Sean gently rib Fiz about her new nice and how she’s finally landed on her feet.

She tries her best to appear enthusiastic, but is all as it seems?

Later Fiz calls in at the garage and Tyrone admits how much he misses her and the girls. What will Fiz say?

Ever since Phill arrived, fans have been suspicious of him and come up with numerous theories about him.

However more recently Phill has been trying to help Maria Connor with her election campaign.

Some fans have been speculating Phill could have an affair with Maria, or that he’s actually been plotting against Maria.

Have you been watching Corrie? Leave us a comment on our Facebook page @EntertainmentDailyFix and let us know what you think