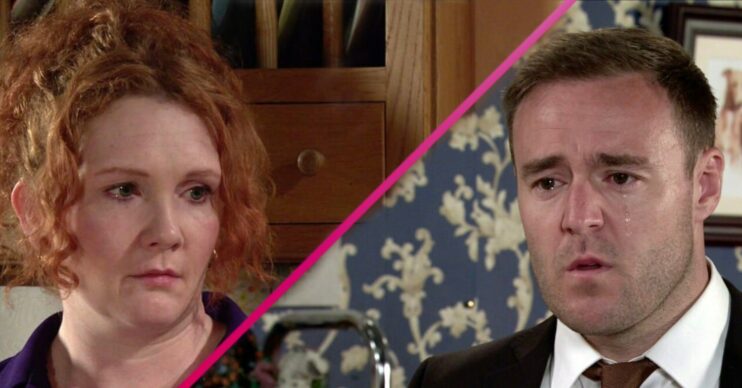 Coronation Street SPOILERS: Tyrone does the unthinkable while Fiz prepares for prison

It's time Hope faced the music

In last night’s visit to Weatherfield, Fiz was questioned by police and covered for daughter Hope by claiming she started the fire at Tyrone, Alina and Emma’s flat.

Fiz would gladly do time for her little girl, but Tyrone knows that Hope needs help and that protecting her would be dangerous.

He makes the painful decision to tell the police that Hope was responsible. But now the truth is out, what will Hope’s future look like?

In her prison cell, Fiz has made peace with the idea that she’ll go down for what happened that night.

But when officers tell her they know Hope is the true culprit, her attempts to deny it are futile.

She’s released with a caution and goes mad at Tyrone for betraying their little girl.

Fiz can’t believe that he’d throw Hope to the wolves when they’d agreed that she’d take the rap.

Read more: OPINION: Coronation Street – ‘Fiz needs to stop protecting Hope and let her face the consequences of her actions’

However, when they return home, Evelyn demands a truce between them.

Pointing out that Hope needs them to provide a united front, Evelyn makes Fiz and Tyrone sit their girl down for a serious talk.

It’s a tough day as the family head to the police station for Hope’s preliminary interview.

Evelyn sits in as her appropriate adult while detectives gently question her about what she did.

Hope doesn’t take long to admit her shocking actions, but she insists that she never meant Alina or the baby to come to any harm.

Despite her remorse, Hope isn’t off the hook. In fact, she’s being charged with starting the fire – and the case could go to court.

Back on the Street, Alina is struggling with Tyrone’s neglect of her.

She’s finding it hard to cope with his devotion to Hope and Fiz, particularly as she continues to mourn their lost baby.

After getting sloshed in the Rovers, Alina stumbles out to see her man playing happy families with his ex and their kids.

It’s only when Fiz sends him to look after his drunken partner that things improve for Alina.

She’s stunned when Ty talks about his deep regrets over the miscarriage and how he’d dreamed of them marrying and having a family together.

Believing that Tyrone wants to make her his wife, Alina happily accepts his ‘proposal’.

The only problem is, Ty didn’t realise he was proposing.

Caught in the crossfire

It’s the world’s worst timing when Tyrone has to announce his engagement as the family heads to court for Hope’s sentencing.

Later, when they return home after another awful day, Ty breaks down in front of stunned Fiz.

Telling her how deeply unhappy he is and how terrible he feels for wrecking all their lives, Ty is a broken man.

But what does that mean for his future, and is Alina the woman he wants?

Will you be watching next week’s episodes of Coronation Street? Leave us a comment on our Facebook page @EntertainmentDailyFix and let us know what you think of the current storylines.