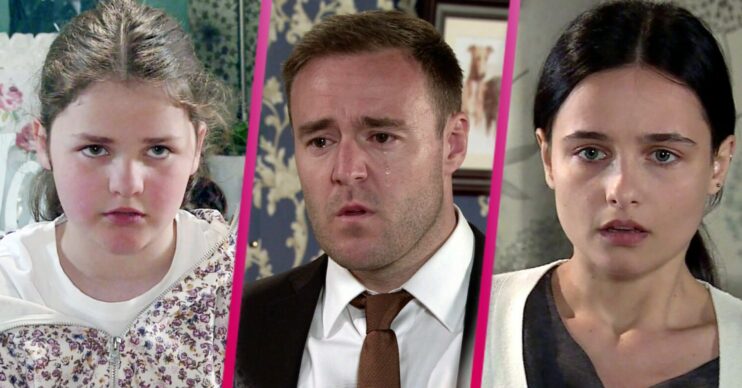 Coronation Street spoilers show that Tyrone makes a big decision next week when he chooses daughter Hope over fiancée Alina.

Ever since he left Fiz, guilty Tyrone’s been torn between his family and his new love.

He’s already having doubts about his future with Alina, but now he needs to take action.

But what happens to put Ty in a position where he has to make his decision?

I’’s going to be a tough week for the Stape-Dobbs clan when Hope attends her first therapy session.

The court has ordered her to complete the sessions following the arson she committed at Tyrone and Alina’s flat.

Fiz and Tyrone struggle to get reluctant Hope to go, but when she’s there, she finally starts talking.

She tells her therapist that she started the fire at Tyrone and Alina’s flat because she felt sad when Daddy left them.

Hope breaks their hearts as she explains that people are always leaving her – with Tyrone finally grasping the enormity of his actions.

While Tyrone is having his heart ripped out at Hope’s therapy session, Alina is looking to the future.

She’s excited about planning their wedding and doesn’t realise that Tyrone never meant to propose.

So, when she tells forlorn Ty that she’s booked them a trip to Romania so he can meet her family, he’s crushed.

There is no way he can leave Weatherfield while Hope is in turmoil and needs her parents’ full support.

When it comes down to a clear-cut choice between them, Tyrone is in no doubt that his priority is Hope.

How will Alina react when Ty tells her the Romania trip isn’t happening, and what does it mean for their future together?