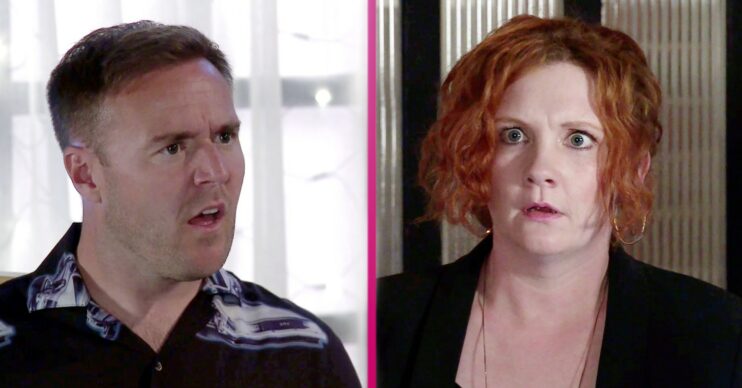 Tyrone isn't happy to see Fiz has moved on

In next week’s scenes Fiz and Chris have lunch at the Bistro. Chris tries to talk Fiz into doing a follow up article.

Meanwhile Kevin advises Tyrone to ditch the idea of writing his own article on his side of the story as nobody wants to hear him badmouth Fiz.

Fiz confronts Tyrone in the café over his proposed article. Will he go through with it?

Coronation Street spoilers: Fiz goes out on a date

Later Fiz meets up with Phill, the man she met in the furniture shop, in Speed Daal and they instantly hit it off.

Soon Tyrone calls in for a takeaway and sees Fiz and Phill together.

He’s put off to see Fiz enjoying her date.

Tyrone gets jealous as Fiz moves on?

Later in the week, Fiz asks Tyrone if he’ll have the girls so she can go on a second date. However he refuses and tells her that he’s taking Alina out for dinner.

Knowing that Fiz and Phill will be at the Bistro, Tyrone takes Alina there for dinner.

As they sit down, Tyrone watches Fiz like a hawk and Alina gets annoyed.

Suffering from a headache, Alina decides to head home leaving Tyrone to pay the bill.

In an attempt to make peace, Phill pays Tyrone’s bill, but Tyrone is humiliated.

He soon takes a drunken swing at Phill causing him to trip.