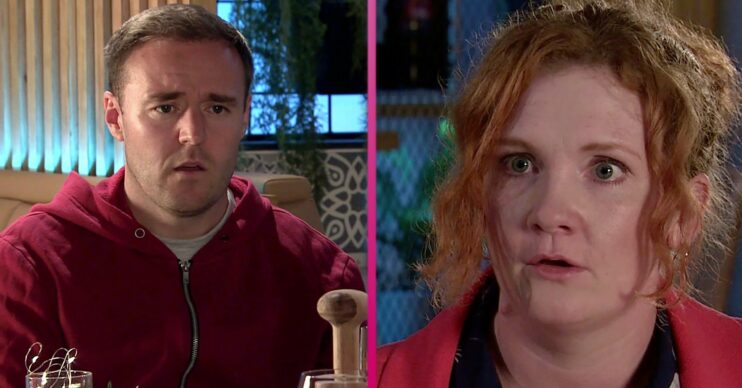 He finally admits his feelings for Fiz

While Alina is busy planning their dream Romanian wedding, Tyrone can’t stop thinking about his ex.

So, when he hears Phil is back on the scene and dating Fiz again, Ty turns into the green-eyed monster.

Rushing over to the Bistro, he tells Fiz the truth – he wants her back.

What does this mean for his future with Alina?

Tonight Alina first realises things are going sour when Tyrone refuses to come to Romania with her.

He insists that Hope needs him right now, and he can’t disrupt his vulnerable daughter’s life anymore.

Initially, Alina isn’t happy, but she realises that Tyrone is doing the right thing after chatting with Michael.

But trouble is right around the corner.

Fiz is in bits after discovering there’s been a petition to ban Hope from returning to school.

When Tyrone hears that Phill has taken her out to cheer her up, he’s consumed by jealousy.

Unable to hide his true feelings anymore, he goes to find Fiz, and when Phill’s in the loo, he confesses all.

Telling the stunned Fiz that he enjoyed their kiss and that his engagement to Alina is a terrible mistake, Ty begs for a second chance.

But after everything he’s put her through, could Fiz even consider a reunion?

What’s next for Tyrone and Alina?

It’s already awkward after their intense conversation, but things get even worse when Hope refuses to go to school.

Fiz summons Ty, and Alina follows, only for Hope to confess the fire at the flat wasn’t her first foray into arson!

Alina can’t believe that Ty had kept the truth from her and goes mad at him for being a liar.

Pushed to the edge, Tyrone finally takes the opportunity to be honest and admits he wants to reconcile with Fiz.

Raging and devastated, Alina defaces their couple’s photo and delivers a public humiliation to Tyrone as his neighbours watch on.

Then she jumps in a taxi to the airport and prepares to leave Tyrone and Weatherfield forever.

But when Ty discovers that Fiz isn’t interested in him anymore, he realises he’s lost both women.

Having found out Alina is yet to get on her flight, Tyrone races off to try and find her.

He tracks her down at the hotel she’s staying in and implores her to reconsider her decision to leave.

Alina makes out that it’s over between, will Tyrone accept her decision?