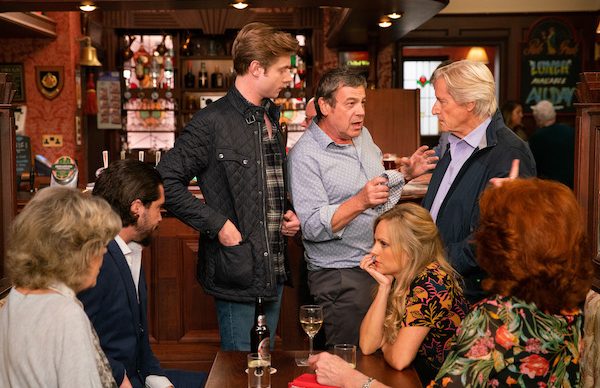 These two wouldn't miss a party!

There’s excitement on the cobbles when two of Ken Barlow’s oldest friends make a return for his 80th birthday party in next week’s Coronation Street.

With Ken’s 80th fast approaching, he was planning to celebrate in Italy with Claudia.

But with Sinead’s devastating diagnosis hanging over the family, Ken makes the decision to stay at home and celebrate with his family instead.

As he breaks the news to Daniel next week that he won’t be leaving for Italy as planned, Daniel is grateful and Claudia understands his need to stay at home.

But not one to let a good party go to waste, Audrey suggests they celebrate with a party in Weatherfield instead.

However, with Sinead’s situation at the forefront of everyone’s minds, Ken isn’t sure it is appropriate to be partying when his daughter-in-law is so sick.

But when Daniel hears his dad turning down a chance to celebrate his 80th year, he disagrees and tells Ken that a party would be just what they need to forget their problems for a moment.

As Daniel and Sinead agree to go along to Ken’s party they promise each other they will savour every day they have left together.

But when the doctors tell them that Sinead’s cancer isn’t responding to treatment, the pair are devastated when they discover she now only has weeks left to live instead of months like they thought.

But as the pair head to the party, Sinead is determined to put on a brave face, and the whole celebration is a huge success with both Norris Cole and Emily Bishop making an appearance!

Norris surprises Ken when he turns up in the Rovers, while Emily Skypes from Edinburgh to wish her friend many happy returns.

Read more: Underworld: Every owner of the Coronation Street factory

But while Ken is thrilled to see so many friends and family around him, he struggles to contain his emotions after he hears Sinead’s latest diagnosis from the oncologist.

Will the family be able to support one another as they face some of the toughest times yet?

Are you excited to see Norris and Emily make a comeback? Leave us a comment on our Facebook page @EntertainmentDailyFix and let us know what you think!