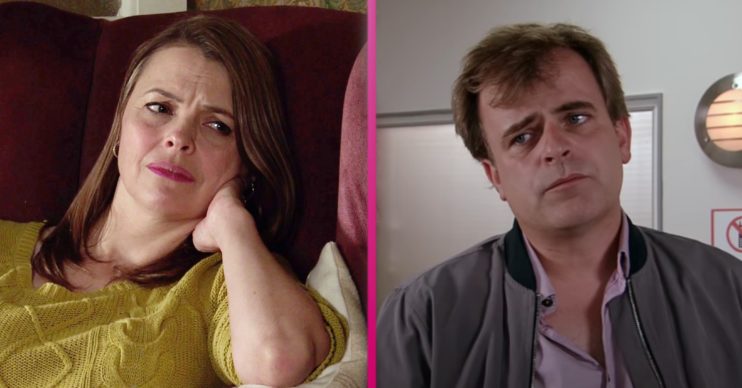 Coronation Street SPOILERS: Tracy and Steve attacked by a troll over tragic Oliver

And it's someone they know!

Coronation Street spoilers reveal Tracy and Steve are faced with cruel comments from a troll.

In this week’s scenes Cathy berates Brian for chasing Steve over his paper bill, pointing out that he’s still grieving for Oliver.

Taking her purse out, Cathy pays his paper bill for him, unbeknown to Steve.

Later Cathy reveals she would like to do more to help Steve with his fundraising. But when she shows Tracy some of her ideas, she gives Cathy short shrift, leaving Cathy hurt.

Cathy offers her fundraising services to Tracy again but she cuts her dead.

Angered by Tracy’s comments, Cathy posts her own views online about Steve and Tracy’s fundraising efforts.

Steve is upset to read the comments online suggesting that he and Tracy are syphoning money from Oliver’s fund.

Having pinpointed the troll Lemon Drop, Amy vows to get revenge on them.

When Cathy overhears Amy telling Asha about the online trolls and how upset her dad is, she feels terrible. Will she confess that she was the person leaving the comments?

What happened to Oliver?

Leanne and Steve’s three-year-old son Oliver was diagnosed with an incurable and life-limiting mitochondrial last year after he began having seizures.

Doctor’s told Leanne and Steve that Oliver’s brain damage was so severe that he would never be able to breath on his own and combined with needing constant sedation, he had no hope of recovering.

They believed it would be in Oliver’s best interest to withdraw his life support. However Leanne refused to let her son go and took the hospital to court to fight the decision.

The medical trust were satisfied doctors had done all they could for Oliver. Leanne vowed to appeal, but Steve wanted to end his son’’ suffering.

Eventually Leanne decided not to appeal and made the decision to turn off Oliver’s life support on November 20th 2020 and he died shortly afterwards.