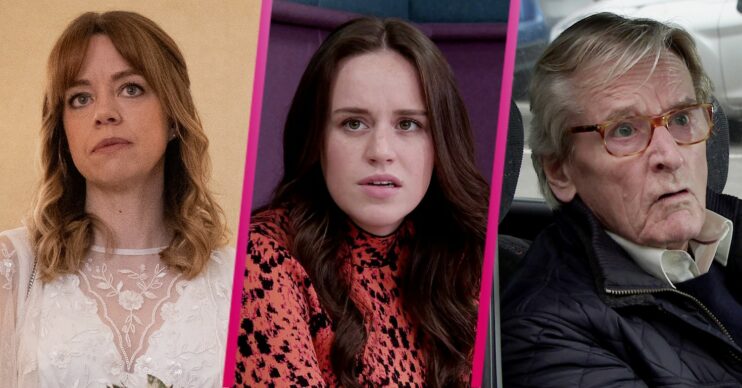 Coronation Street spoilers for next week reveal Abi is getting desperate to prove Imran is setting her up. But will she go too far and mess it all up herself?

Meanwhile, there’s heartbreaking news for Faye that changes her entire future – will Craig stand by her?

And, Aggie is in trouble at work, but will the cobbles nurse win in the end?

Abi is fuming to find out Imran has hired Ben to find dirt on her.

She targets Toyah, who is about to leave for her wedding, and jumps in the driver’s seat of the wedding car.

Abi kidnaps a shocked Toyah and drives off, trying to persuade her to cancel the wedding. What will Toyah do?

Abi eventually drops Toyah off at the hotel, but as she enters the venue it’s clear she’s having doubts.

The ceremony goes ahead with Nick, Leanne, Kelly and Adam in attendance. The party then carries on at the Rovers.

But has Toyah done the right thing?

Imran corners Abi in the street and tells her she’s an unfit mother.

But he’s torn when Kelly approaches him and begs him not to take another of Abi’s kids away.

What will Imran do?

Abi is thrilled when Elliot says his fees have been paid by a mystery benefactor and he will represent her in court.

However, when Dean comes knocking and wants to score drugs, Abi knows she’s in a difficult position.

Desperate to get rid of him, she gives him some cash, but their exchange is caught on camera by Ben…

He says he’ll lie in court about what he’s seen.

Faye is given the heartbreaking news she is suffering an early menopause.

She’s upset to learn she’ll never be able to have any more children.

Faye breaks the news to a stunned Craig, who confides in his mum. But tactless Beth tells her boy to dump Faye.

When Craig reveals his mum’s response to Faye, will he take her advice?

Stu asks Ken to give him a lift to the wholesalers, but once there an officer accuses Stu of an attempted break-in.

Ken is assumed to be the getaway driver and they are taken to the police station.

Stu is eventually allowed to leave, but the officer comments he’s had a lucky escape considering his track record. What is Stu hiding?

Disappointed Yasmeen tells Stu he needs to find somewhere else to stay that night.

He tries to make amends the next day by serenading her in the restaurant.

But Yasmeen is not impressed and orders him to leave.

Max admits he was running away as he didn’t want to go to prison.

But he’s got other concerns too when David breaks the news he’s been expelled from school.

Read more: What happened to Jez Quigley in Coronation Street?

Mr Thorne gives Aggie a verbal warning when he feels she’s trying to make him look incompetent in front of his patient, Peter Barlow.

But she later overhears Mr Thorne bragging to a colleague he rushed Peter’s operation to win a bet.

Compelled Aggie reports him. When all of Mr Thorne’s operations are then cancelled, he tells her he’s going to make her life a misery.

Making multiple mistakes at work, including mixing up two clients’ ashes, George is berated by Todd.

Todd tells him he has to speak to Eileen.

George finally admits he’s been staying awake all night so he doesn’t subject her to his snoring.

But how will Eileen react?

It’s a year since Seb died and the day of his vigil arrives.

Asha and Nina support her.

Kirk buys a new air horn for the factory.

He tells annoyed Carla and Sarah he plans to blow the horn every time they make a sale.

Will they regret making him Extra Office Administrator?