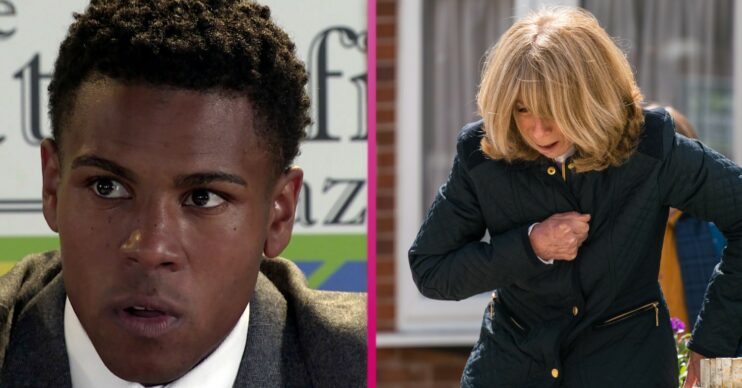 Gail is stressed out

Coronation Street spoilers for tonight reveal Gail clutches her chest in pain, is she going to be okay?

Meanwhile James announces to the press that he is gay, and Fiz goes with Tyrone to Kirsty’s funeral.

David puts pressure on Gail to let Sam see Nick, but a stressed Gail is adamant she must respect Natasha’s wishes.

Meanwhile Nick tells an angry Sarah that he’s going to sell his shares in the factory as he wants to spend more time with Leanne.

When David tricks Gail into Sam and Nick meeting, another row breaks out. Gail heads outside for some air where Sam finds her doubled over, clutching her chest in pain.

As an ambulance is called, a breathless Gail accuses Nick, Sarah and David of causing her heart attack with their endless bickering. Will Gail be okay?

Tonight James is horrified to see pictures of him and Danny, along with derogatory comments about his sexuality.

He goes to warn Danny, but he’s already left for the airport.

As James takes the stage at his promotion press conference, he’s asked awkward questions about his private life. James steals himself to tell the truth.

James looks at his family and takes strength from them. He announces that he is gay.

As the journalists bombard him with questions, how will James respond?

Fiz steps in to support Tyrone

Fiz tells Tyrone she’s going to the funeral with him.

Later they both return from the funeral and Tyrone bottles out of telling Fiz about Alina’s pregnancy.

He makes excuses to head home.

Alya reminds Ryan that if they’re going to get their own place, he needs to find some more work.

Daisy attempts to cheer him up at the pub.

When Ryan reveals that he’s a DJ, Daisy urges him to reboot his career and follow his heart.

Johnny announces he’s found a new place to live. Jenny suggests they have a farewell drink and they reminisce over the good times they had together.