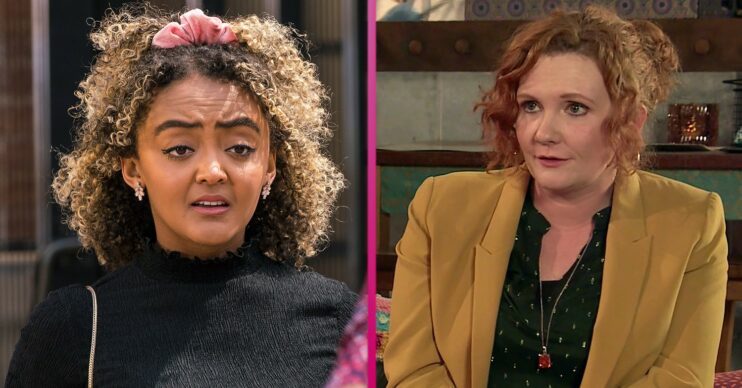 Meanwhile Tyrone gets jealous when he spots Fiz on a date, and Nick panics when he thinks Sam has gone missing.

When Curtis reveals that he’s heading out Steve offers to accompany him.

Tracy watches baffled as Curtis gets into Steve’s taxi.

When Tracy tells Emma that she saw Steve giving Curtis a lift, Emma is left reeling.

As Steve and Curtis arrive back on the street, Tracy demands answers.

Curtis makes the decision to tell Emma his secret.

Nick and Sam return from the park and a stressed Nick shows Leanne the graze on Sam’s knee.

Leanne says he should stop molly mollycoddling his son.

Soon Sam wanders onto the balcony with his headphones on, however Nick thinks Sam is missing and starts searching for him.

Nick and Leanne conduct a frantic search for Sam as he remains on the balcony.

Fiz has a date

Later Fiz goes and meets up with Phill in Speed Daal and they instantly hit it off.

Tyrone calls in Speed Daal for a takeaway and it put out to see Fiz enjoying a date with Phill.

James has some news

As a nervous James sets out for his interview, Danny suggests to Grace that she and Michael should join him and James in the Bistro later.

Over dinner in the Bistro, James reveals he’s been approaches by a leading gay magazine wanting an interview.

Michael, Grace and Danny are delighted for him.

Kelly opens up to Laura

Laura calls in at the Rovers and moans to Imran that she’s skint and can’t find a job.

When Carla reveals they’re looking for a cleaner at the factory, Imran gets the job for Laura.

Later Sean tells Laura about Fiz’s article in the Gazette and how they offered to pay her to do another one, leaving Laura intrigued.

Later Laura goes to visit Kelly in prison and quizzes her daughter about the night of the attack.

Laura assures Kelly she can tell her anything. Kelly admits she suffers from flashbacks.