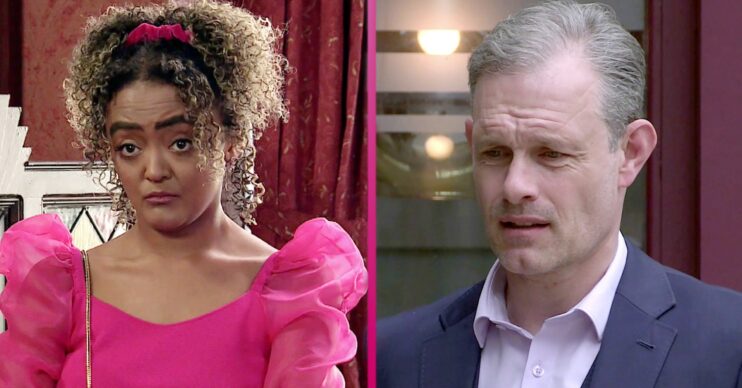 Meanwhile Daisy’s latest actions leave Jenny furious, and James runs into someone from his past.

Coronation Street is on twice tonight. The first episode is at 8pm, followed by another episode at 8.30pm.

Tyrone is grateful as as Fiz helps him organise Kirsty’s funeral and explain to Ruby that her birth mummy has died.

Meanwhile Alina masks her fears that she might be pregnant.

When she hears in the factory about Tyrone’s past with Kirsty, she is stunned. Later Alina confronts Tyrone, hurt that she found out about Kirsty’s abuse from Sally.

Tyrone is left floored when a tearful Alina blurts out that she’s pregnant.

Reeling in shock, Tyrone heads to his meeting at the undertakers and leaves Alina crying.

As Tyrone struggles to concentrate on the funeral arrangements, but Fiz assures him that he’s a great dad and she’s happy to sort out joint custody.

Hearing Alina has been feeling nauseous, Evelyn realises with horror that Alina is pregnant.

Jenny makes a decision about the Rovers

An excited Jenny heads into town to sort out the mortgage on the pub and Daisy masks her panic.

Soon Daisy changes the rota and gives herself all of Sean’s shifts. However Emma points out that with Sean gone, so too is the hotpot recipe.

Daisy tries to play it down while Emma asserts she isn’t lifting a finger until Sean is reinstated.

Later Jenny is horrified to read he Double Glammy article in the Gazette.

When she discovers that Daisy has stripped Sean of his shifts and Emma has staged a walk-out, she’s furious and reinstates Sean.

Daisy is left humiliated, especially when Jenny reveals she’s looked at her finances and is going to buy the pub outright herself.

Meanwhile James’ manager tells him that Tommy Orpington is retiring and he’d like to promote him into his place.

As James shares his good news with Ronnie, he’s surprised to see Danny at the bar.

The two get talking and Danny suggests they have lunch.

As James and Danny catch up over lunch, a couple of lads at the bar take photos.

Danny reveals he’s been offered a new job in France. James suggests they they give things another go, but when James admits it would have to be secret, Danny heads out.

James is left gutted, wishing he could live his life and be himself.

David has a plan

Nick is saddened that Natasha won’t let him see Sam. When David discovers Gail is looking after Sam tomorrow, he forms a plan.

Later Nick is choked when he bumps into Sam but Natasha drags him away.

Ryan is fed up

Alya reveals that the bank has agreed to repossess the community centre, meaning Yasmeen can pay off all her debts.

Later Ryan suggests to Alya that they have a night out, but he’s fed up when she says she’s busy.