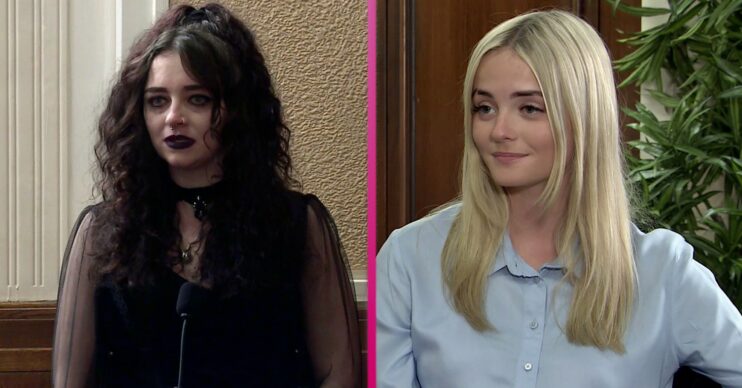 Nina tells the court what happened

Coronation Street spoilers for tonight reveal Nina tells the court what she remembers.

At the police station Nina signs her new statement, hoping it will help bring justice for Seb.

Meanwhile in court Corey’s barrister, Sabeen, is concerned to hear about the new statement.

As Corey and Kelly’s trial gets underway, Nina is urged to readopt her goth look as no one deserves to be persecuted for the way they look.

Seb’s final voicemail is played in court and Kelly hangs her head in shame, while Abi shoot venomous looks.

Nina tells the court how she remembers seeing Corey kick Seb repeatedly and Kelly begging him to stop.

When Sabeen cross examines her, will Nina’s story stand up?

Later in court Sabeen questions Nina about the reconstruction that she staged and does her best to discredit her friends.

Nina starts to lose her temper and the court takes a break leaving Imran worried.

As court resumes, Stefan looks at Corey, increasingly worried about Nina’s account of what happened.

Soon Asha enters the witness box and tells how Corey bullied her and forced her to lie to the police.

When Sabeen questions if she’s still in love with Nina, what will Asha say?

Imran questions Asha, suggesting Seb was murdered simply because he got in the way. Corey was in fact targeting Nina out of jealousy as Asha was in love with her, not him.

Asha is horrified at the implication it was her fault. Outside, she sobs in furious Dev’s arms.

Meanwhile Kelly reveals that her mum has offered to give evidence, explaining she stopped her from going to the police straight away.

However Imran is unsure, aware Laura could be a liability.