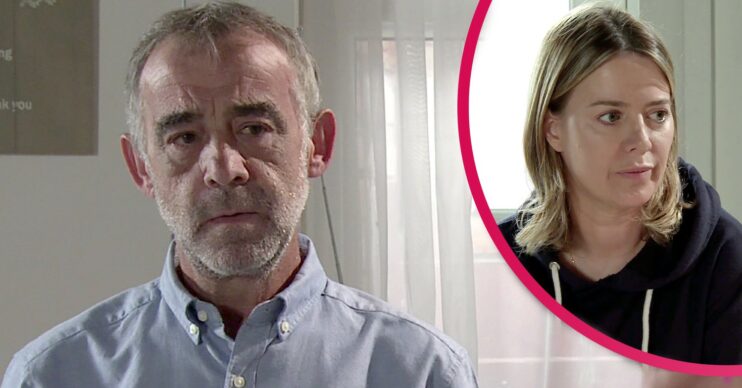 Kevin is desperate to find Abi

The Gazette is full of Corey scoring a goal in his first match and Nina feels there’s no escaping his smug face.

Nina tells Roy that she intends to make the most of her life rather than dwell on pursuing justice, as she couldn’t bear to cause him pain.

Roy is hugely relieved to have got through to her.

He’s anxious something has happened to her when Sally reveals she’s had no response from her either.

Kevin leaves a new message, pleading for Abi to get in touch.

Later a frantic Kevin informs the police of Abi’s disappearance, but is shocked to et a notification from the bank that £2k has been taken from their joint account.

Sickened by the thought of what Abi’s taken the money for, Kevin goes to the Dog & Gun with a photo of Abi, asking the regulars if she’s been in.

Discovering Seb’s dad Tez in the bar, he breaks the news that Seb was murdered.

He explains his fears that Abi has turned to drugs in her grief. Tez assures him that he hasn’t seen or heard from Abi.

With few bookings for the tasting event, Zeedan heads out to drum up some interest and teach Debbie a lesson.

Yasmeen and Alya break the news to Zeedan that they’ve been inundated with last-minute bookings, but Speed Daal’s chef, Navid, has called in sick.

As the local food critic arrives at Speed Daal, Alya and Yasmeen are puzzled that none of their bookings have turned up.

A furious Zeedan guesses what’s happened and he soon comes back to Speed Daal with a homeless man, Stu, in tow.

He explains he’s arranged for all the uneaten food to be donated to Billy’s soup kitchen.

Daniel is slightly annoyed when Summer reveals she’s now using her mentor’s personal statement for guidance rather than his.

When Summer leaves her bag at no.7, Aadi is shocked to discover she’s copied her mentors personal statement, word for word onto her own.

Summer admits to Daniel that she copied her mentor’s statement.

Daniel insists that her first one was great and Oxford would be lucky to have her.

Tim is pushed aside

Sally and Tim celebrate their first anniversary. However the occasion is swiftly forgotten when a thrilled Sally opens a letter from the council is considering her parking proposals.

Tim is irritated when Sally ditches him to discuss the parking campaign with Fergus in the Rovers.

Tim remarks to Gary that the demented glint in Sally’s eye is back.

Later Tim and Sally go to the Bistro for their anniversary meal, but Tim is aghast when Fergus joins them, having been invited by Sally.

Jenny is amused by Daisy’s outrage at Daniel turning her down for a date.

Later Jenny chats to Leo, hoping to get him interested in Daisy. Leo reveals he’s working on the sinkhole at No.8 so he’ll be around for a while.

James gets some news

James informs Michael that County’s PR team has apologised for their lack of support for his police complaint.

Michael is pleased and urges James to use his platform for good.