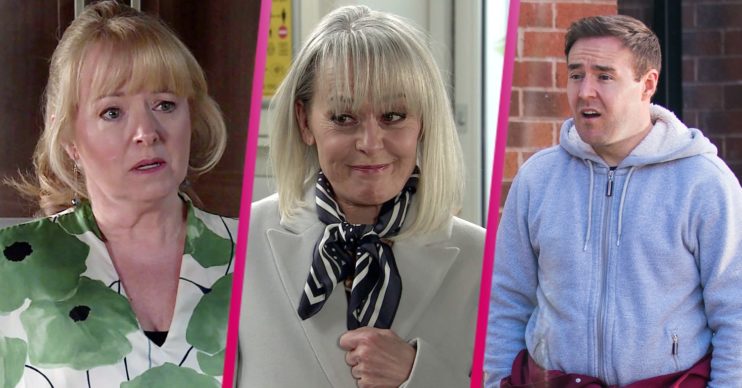 Will Simon fall for Sharon's trap?

Meanwhile Sharon makes another attempt to find Simon and Alina and Tyrone get some bad news.

Jenny makes it clear to Ronnie that it’s time he moved out.

Ronnie is shocked and Daisy is intrigued. Soon Daisy finds a distraught Jenny in the Bistro.

Later Ronnie has his bags packed and begs Jenny to give him another chance.

Soon Johnny arrives home unexpectedly with a bunch of flowers.

After some awkward introductions, Ronnie explains that he’s just leaving and picks up his bags and heads out.

Johnny gives Jenny a hug and is glad to be home. He thanks Daisy for looking after Jenny while he was in prison.

Ronnie calls in to say goodbye to Ed. When Ed suggests to his brother that he stay in the campervan, Ronnie is grateful.

Sharon goes to see Dev and thanks him for a lovely evening. But she makes out she lost an earring and it’s most likely at his house.

Dev hands his keys over to Sharon and she heads over to No.7. Sean reckons Dev has misread the signals and Sharon’s got the hots for him.

Sharon heads into No.7 and messages Simon from Aadi’s console.

When Dev returns, Sharon is worried that Aadi might see her message to Simon, she convinces Aadi to ban his son from his console as his choice of games is far too violent.

Later Dev is in his element when Sharon agrees to go round to his for another drink.

She sends Dev to the shop for some vodka and logs onto Aadi’s console and sends Simon a message asking where he is.

Tyrone gets some bad news

Alina confides in Tyrone that she’s not ready to find a new flat as the salon flat reminds her of Seb and she finds it comforting. Tyrone is understanding.

When Debbie announces that she’s selling the salon flat and wants them out. Tyrone wonders how he will break the news to Alina.

Debbie offer Tyrone first refusal on the salon flat if he wants to buy it. He asks Kevin if he’d consider lending him £8k towards a deposit on the flat.

Nina throws her dresses out

Roy’s perturbed to find a bin bag full of Nina’s dresses. Asha offers to look after them in the hopes Nina changes her mind. Roy is grateful.

Asha texts Corey, determined to find out the truth.

Daisy goes behind Sean’s back

Over lunch, Sean admits to Carol that Double Glammy isn’t all its cracked up to be.

Later, Daisy goes behind Sean’s back and signs Carol up as a Double Glammy rep. Will Sean find out?