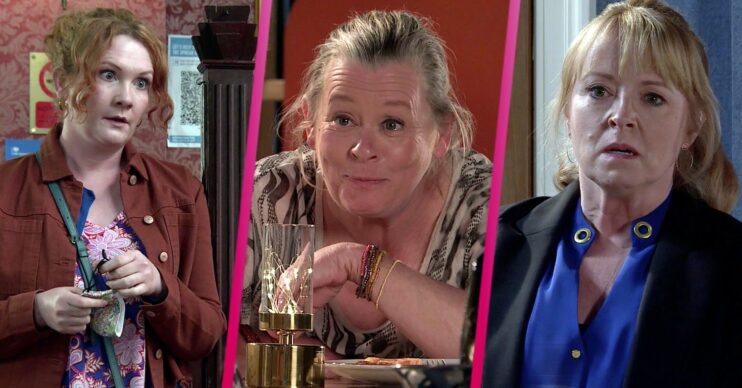 Fiz is furious with Tyrone

Meanwhile Bernie and Dev go on a fake date and it’s announced that Johnny and Jenny are selling the pub.

When Fiz hears about Tyrone and Alina’s sexy photoshoot, she’s furious and demands that Tyrone contributes to Hope’s zoo trip.

Meanwhile Tyrone gets a call from Hope’s school asking him to collect her as she’s been playing up.

However when Hope gets back to the street she takes her mood out on Alina.

Hope ends up running into the road, but Ronnie manages to stop his car.

Alina explains how Hope ran in front of a car just to scare her. However as Fiz approaches, what will Hope’s story be?

Later Fiz tells Tyrone that she has to put the girls’ safety first and he can’t seem them again until there’s a proper consent order in place.

Tyrone is horrified and points out that Ruby is his daughter, not hers.

Fiz reels whilst Evelyn is furious at the line Tyrone has crossed.

Soon Fiz reads a message from the bank. Riled, she approaches Adam and reveals that she needs his help.

Dev and Bernie go on a fake date

When Aadi pokes fun at Dev’s non-existent love life, Bernie comes to his rescue and makes out they’re going off for brunch.

Dev plays along, but as the pair enjoy their fake date, Dev suggests they go back to No.7 and continue the charade.

Later Dev spells out to Bernie that she won’t be getting a repeat performance. Gobsmacked at his arrogance, Bernie tells Dev not to flatter himself.

The Rovers goes up for sale

At a staff meeting the news is broken to Sean and Emma that Johnny is selling the pub.

When Sean finds Daisy trying to flog Double Glammy products to Carol, he does his best to put her off.

However Daisy persuades Sean that with his expert training she would make a great sales rep.

When Carla requests time off to look after Peter, Sarah suggests it would be best if she didn’t come back at all after what happened to Lucas, leaving Carla furious.

Meanwhile Nina confides in Asha that she can’t stop blaming herself for what happened to Seb.