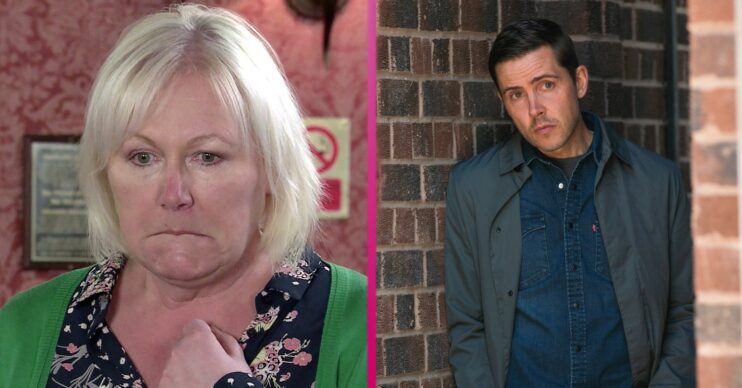 Paul is taken away in a police car

Coronation Street spoilers for tonight reveal Todd steals the heat pump for the halfway house, but Paul gets the blame.

Meanwhile George and Eileen panic when the undertaker van goes missing with a body in it.

Paul is shocked to discover that he hasn’t been paid. In the builder’s yard, Ed admits he has a cashflow problem.

Meanwhile Todd meets with Will and tells him he’ll need help to steal the heat pump.

When Billy notices Todd’s missing ring, Todd panics and makes out he’s having it resized.

Todd demands his ring back, but Will tells him he can have it back when he hands over the cash.

Having lured Ed out of the builder’s yard on the promise of a lucrative job, Todd borrows the undertaker’s van to use it to transport the heat pump.

As Todd sets about stealing the heat pump, Ed returns to the yard. He hears a noise and Todd is forced to hide.

Ed soon locks up and leaves. When Ed notices the heat pump is gone, he reports it as stolen.

Craig wonders if he’s fallen out with anyone recently and Ed immediately suspects Paul.

Craig finds Paul in the Rovers clearly drunk and questions him about the stolen heat pump.

Billy and Todd watch as Craig manhandles an angry Paul into a police car.

George and Eileen panic as the van goes missing

Eileen feels guilty about George’s broken wrist. She calls at the undertakers and offers to help out.

When George asks her to help him collect a body from the hospital, Eileen is horrified.

Having collected the body and parked the van, Eileen invites George in for lunch.

Eileen and George leave No.11 and discover to their horror, the van has gone.

Later Todd returns the van to George, making out that he borrowed the van to help a mate out who had a crisis.

He says he never would’ve taken the van if he knew there was a body in the back.

Todd meets up with Will in the ginnel and tells him he’ll have his money in 24 hours. George tears a strip off Eileen for her son’s behaviour.

Having been summoned by Alya, Ryan is hopeful as he goes over to No.6.

When Ryan tells Daisy he’s landed a gig in Val d’lsere, Daisy is quick to suggest that she could go.

In the factory Beth and Kirk grill Fiz about her date, but she refuses to discuss it.

Maria urges Fiz to take Chris up on her offer and do that article, saying she’ll find it therapeutic.

Later Fiz meets up with Chris and agrees to do the article about what happened with Tyrone and Alina.

Curtis has a plan

Curtis makes out that they’ve offered the Mr December top slot on the calendar to Dev, but Steve falls for his ploy and argues he’d be more suited.

Emma and Curtis talk to Dev and Tim into agreeing to take part in the charity calendar.