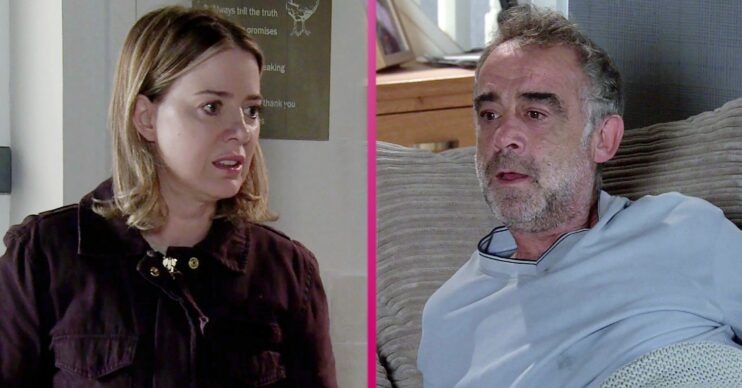 Kevin stirs from a night on the sofa to find Abi standing in the living room leaving him stunned.

Abi apologises profusely for worrying Kevin and promises the £2000 she took from the account was for food and accommodation, not drugs.

Abi is blown away by Jack and Kevin’s welcome home efforts but Jack is upset and Debbie is furious when she tells them she can’t promise she’s going to stay around.

Kevin is puzzled by her words, unaware of what she has planned.

Having taken a call from social services, Toyah excitedly tells Imran that they’re going to be fostering a four-year-old.

However the news piles more pressure on Imran. He soon confides in Adam about Sabeen’s blackmail.

Imran corners Rita in the Rovers and, likening her foster experience to his own, quizzes her about Sharon.

When she reveals Sharon still calls and sends the odd text, Imran’s interest is piqued.

Whilst Rita is distracted, Imran pockets her phone, but to his horror, it starts ringing.

Dev is intrigued when Natasha mentions she is considering buying the closed Salon so Sam can be closer to his dad and the Platt family.

Leo calls at the Rovers with a bunch of flowers, but as he approaches the bar, he overhears Jenny telling Daisy that she’s enjoying her freedom and is done with relationships.

Daisy admires Leo’s flowers and admits it may be worth giving him a chance.

Daisy discovers the card came with the flowers and points out the flowers were meant for Jenny, not her.

In Victoria Gardens, Hamish talks to Zeedan through his money laundering plans.

Yasmeen later refuses to let Zeedan take over the financial side of the business.

Craig apologises to James and Michael for letting them down and assures them he’ll never make a bad decision like that again.