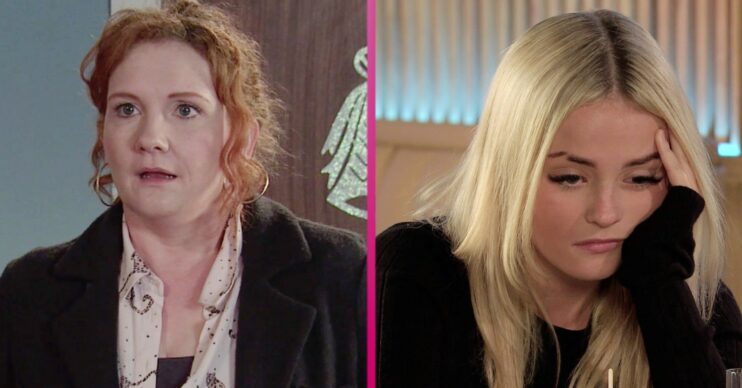 Is Kelly in danger?

Meanwhile Fiz drops a bombshell on Tyrone and Nina continues to struggle.

As Abi bars Kelly on her way to the barbers, Imran watches concerned. Abi tells Imran she just wants Kelly out of her life for good.

But when Imran reminds her she’s done some pretty shameful things herself, she slaps him across the face.

Maria asks Kelly why she didn’t turn up to work, but with Abi’s eyes boring into her, she lies and says she couldn’t be bothered. Maria tells the Kelly she’s fired, leaving her upset.

Craig later finds Kelly in a state having taken some spice. At the police station Craig urges her to get help before she ends up back in prison.

With Fiz, Tyrone and Phill seemingly back on an even keel, Tyrone tells Evelyn that it’s obvious Phill will get bored of playing the family man and when he does he’ll be waiting for Fiz.

Meanwhile when Phill suggests the girls might like to call him their stepdad, Fiz reckons it’s a great idea.

Phill then reveals he’s seen a super family house, but understands if she’s not ready for living together.

Later Fiz goes to see Tyrone and drops a bombshell – she wants to sell No.9. Tyrone’s shocked, but what will he say?

Read more: Christmas soaps review Coronation Street and Emmerdale were brilliant – but EastEnders was a dud

Having spent the night at Asha’s, Nina feels refreshed and gives Asha her Christmas present, a framed drawing of them both.

Asha is overjoyed and Dev is pleased to see her happy again.

However when Asha calls in the cafe and finds Nina suffering from another anxiety attack. Asha does her best to reassure her.

Todd begs Eileen to give George another chance. When George presents her with a new winter coat and reveals he’s booked a table at the Bistro, will he be forgiven?

Leo invites Jenny out for a drink but she refuses to commit and Leo masks his hurt.

Jenny asserts that Leo is too young for her, but Daisy thinks she’s mad and deserves to have a bit of fun.