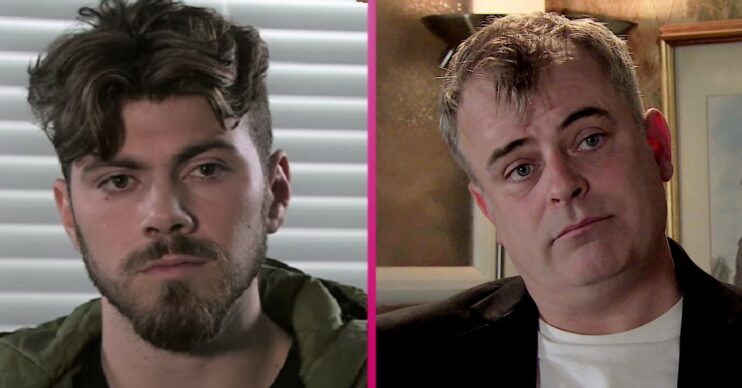 Meanwhile Yasmeen offers Stu a place to stay and Sarah has a suggestion about Christmas.

Emma accompanies Curtis to his appointment with the psychologist. Emma listens, overwhelmed, as Curtis how he’s spent years convincing people that he’s dying as he enjoys the attention.

Curtis assures Emma that he intends to get better, he loves her more that anything and tomorrow could be the best day of their lives.

Later Emma explains to Amy that Curtis is suffering from a factitious disorder and he’s seeing a psychologist.

Amy’s shocked and insists she can’t marry him and needs to tell her family the truth.

Meanwhile, unaware of Curtis’s lies, a drunk Steve hands him his bank card and pin asking him to transfer the £100k they raised to Oliver’s charity account.

At home Curtis opens his laptop and takes out Steve’s bank card.

Kelly is forced to admit to Gary and Maria that she’s been letting Stu sleep in the barbers as he has no where else to go.

Yasmeen offers Stu a room and he thanks her. When he makes a joke about his high cleaning standards, how will Yasmeen react?

As Tim and Gary share a moan about their ambitious wives, Tim lets slip that Weatherfield County are proposing to build a new training ground.

Gary whips out his phone and calls Maria with the news leaving Tim furious.

Maria asks James if he’ll endorse her election campaign but he refuses, explaining all County players have bene instructed not to get involved with any political campaigns about local developments.

However Maria and Phill smell a rat.

George asks Gail for help with a Christmas present ideas for Eileen.

Ken is hurt when Adam says he and Sarah are thinking of spending Christmas alone.

Sarah suggests a joint Platts and Barlows Christmas so not to offend anyone.

Meanwhile Gail tells David that Audrey’s suffering from cataracts and will be moving in until she’s recovered.

As Kevin and Abi arrive back from their honeymoon, Kevin hopes they don’t bump into Kelly.