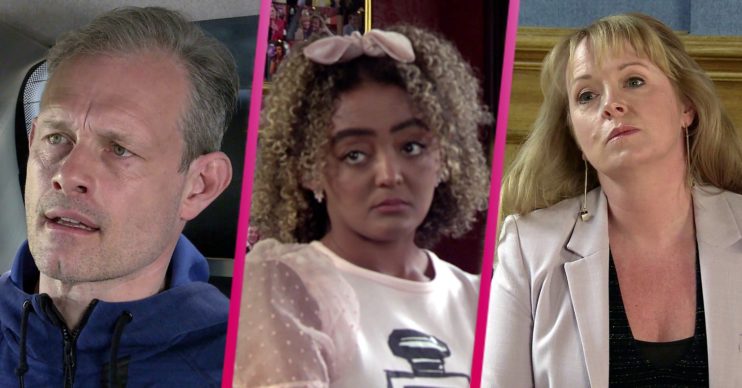 Is Sam going to be okay?

Nick returns home despite Leanne’s fears that he might be walking into a trap.

When Sharon spots Nick going into No.8 she calls Harvey.

Natasha and Nick watching with a feeling of dread as a police officer approaches the house.

Meanwhile a terrified Sam is terrified and still trapped in the van and unable to summon help.

Later Nick finds himself in danger when he gets into a taxi to discover the driver is one of Harvey’s men.

He hands Nick a burner phone and the thug tells him that unless Leanne and Simon retract their evidence, he’ll never see Sam again.

Emma is delighted when a good looking young man offers to help her move some barrels into the cellar.

But Steve is less than impressed to discover Emma having a drink with Curtis – the lad who knocked him off his bike causing him to come last in the charity fundraiser.

When Amy suggests to Steve that he’s becoming a bit obsessed with fundraising and worries he’s heading for another breakdown, Steve realises she has a point.

He tells Emma that from now on he’s going to spend more time concentrating on his family. Steve is touched when she suggests they could do some fundraising together.

Daisy lets slip to Ronnie that she knows all about his and Jenny’s dirty secret.

Later Daisy tells Jenny that Ronnie is giving her some business tips to boost her Double Glammy sales.

When Ronnie reveals Daisy is threatening to go public about their night together unless he helps her with her makeup business, Jenny asserts that she’ll deal with Daisy.

Tyrone gets another job

Tyrone feels the financial strain when he has to fork out for new shoes for the girls and new coffee cups Alina wants for the flat.

Evelyn points out that he has to run two houses and fancy coffee cups are a luxury.

Later Evelyn is furious to discover that Dev has given Tyrone a job doing deliveries. She makes remarks to her grandson about his recent behaviour.

Cathy and Elaine fall out?

Cathy and Elaine enthuse over the new exercise bike. But Yasmeen confides in Alya that the house is starting to feel crowded and she longs for a bit of peace and quiet.

At No.6 Yasmeen, Elaine and Cathy are horrified to spot a mouse.

A fearful Yasmeen, Elaine and Cathy scour the room looking for the mouse. Elaine rounds on Cathy and blames her slovenly ways for enticing the mouse into the house.