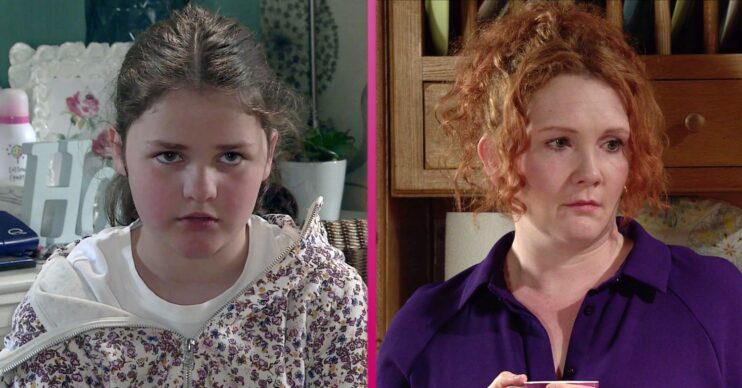 Tyrone goes to the police

Coronation Street spoilers for tonight reveal that the police find out Hope started the fire.

Meanwhile Debbie has a plan to get Nick and Leanne to buy into the Bistro, and Ryan embarrasses Daisy in front of Daniel.

The police find out about Hope

Fiz spends the night in a police cell, sticking to her story that she started the fire.

Alina is unhappy about the cover up and points out that Hope could harm someone else and it will be his fault.

Tyrone goes to the police and tells them that it was Hope who started the fire.

Meanwhile Fiz demands to know why she hasn’t been charged following her confession, but is told new information has come to light.

The police tell Fiz they know Hope was the one who started the fire. Fiz tries to deny it but quickly cracks and begs them not to punish her daughter.

Fiz is released with a caution and finds Tyrone waiting for her. She is furious with him for telling the police about Hope and orders him to stay away.

Evelyn forces Fiz and Tyrone to put on a united front and explain to Hope that the police will want to talk to her about the fire.

When Nick and Leanne refuse to up their offer for half of the Bistro, Debbie feigns indifference and turns them away.

She then sets up a conversation with Ronnie who pretends to be a potential buyer and ‘accidentally’ rings Leanne.

As Leanne listens, will she fall for it?

Leanne tells Nick about the phone call but guesses it was a set-up on Debbie’s part.

Later Nick and Leanne tells Debbie they overheard how keen Ronnie was to buy into the Bistro so they have found a cheaper proposition in town.

Meanwhile in the Bistro, Ronnie is amused by Jenny’s jealousy as she makes snide comments about Debbie.

Read more: Who is Craig Tinker in Coronation Street and what is his mental health struggle?

Daisy overhears Adam telling Daniel that his house is worth £400,000. When Daisy casually asks Adam about Daniel, he’s quick to remind her that she has a boyfriend.

Later Daniel calls in the Rovers where Daisy tries to impress him by claiming to be a lifelong fan of Byron.

However when Ryan questions why Daisy has been looking up Byron quotes on her iPad, Daisy is humiliated in front of Daniel.

In the café, Sally complains to Shona about the increase in chaotic parking locally and how she got a ticket yesterday thanks to an overzealous traffic warden.

Noticing Izzy’s friend Fergus, Sally is embarrassed to learn that he is a traffic warden himself.

Sally spots Fergus in the street and apologises for her café rant.

When she learns Fergus was the one who issued her the parking ticket, Sally loses her cool and Fergus scurries away.

Later Sally goes to Fergus in the hope of getting the ticket revoked, but he gives her the short shrift.

Kevin suggests to Abi that she channels her rage into writing a victim impact statement for the court.

Later Abi tells Kevin she’s struggling to write the statement. Kevin is grateful when Brian offers to help Abi find the words for her statement.