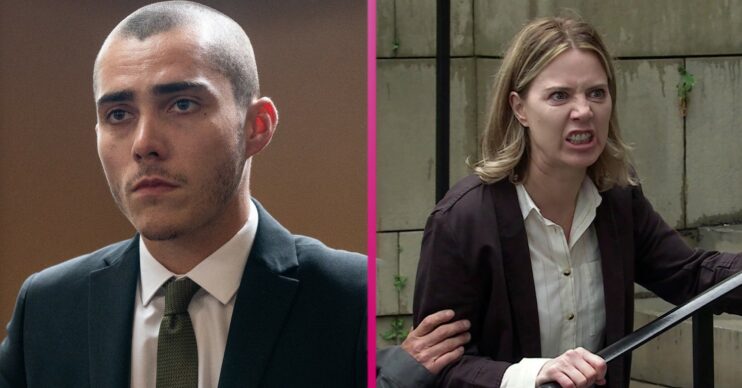 Meanwhile Curtis collapses and Hope has her first therapy session.

Outside court, Abi rails at Stefan and suggests it’s time his son started telling the truth.

Corey takes the stand and lies through his teeth, claiming Kelly viciously attacked Seb as he tried to stop her.

Corey paints himself as the victim, telling the court how Kelly’s dad is a gangster and she threatened to have him killed if he reported her to the police.

Imran cross-examines Corey, suggesting that in fact he was the one who killed Seb.

The trial continues and Imran suggests to Eli that he’s lying about Kelly in order to get a reduced sentence himself.

Outside court, Abi launches a verbal attack on Stefan and accuses him of trying to buy Corey’s innocence with bribes.

Stefan denies it but it’s clear he is rattled. Determined to find something, Abi searches his social media.

Will she find any proof?

When Curtis reveals he’s got a hospital appointment later to get his test results, Emma offers to go with him.

However when he suddenly collapses unconscious behind the bar at the Bistro, an ambulance is called.

In the hospital, the doctor tells him they’d like to keep him in overnight and run some more tests..

However Curtis reckons it’s a waste of time.

Back at the flat, a struggling Emma has a shock announcement for Curtis.

Fiz and Tyrone take a reluctant Hope to her first therapy session. Hope explains to the psychologist that she started the fire because she felt sad when her daddy left and people are always leaving her.

Fiz and Tyrone listen in, heartbroken.

Later Alina tells Tyrone that she’s booked a trip to Romania so he can meet her family, but his heart sinks.

He’s aware he can’t leave Hope at such a crucial time. What will Alina say?

George assures Todd that he’ll dispose of Phelan’s ashes in a respectful manner as soon as he can.

Todd remains unconvinced. While George’s back is turned, Todd tries to steal the ashes, but as he lifts the lid on the urn, George returns and catches him red-handed.

George chases Todd in a bid to retrieve Phelan’s ashes but Todd trips up, sending the ashes flying.

George is furious as Eileen witnesses the mess.

Todd makes out they’re the ashes of Patsy Freeman, a little old lady with no living relatives.

Saddened by Patsy’s sad story, Eileen tells George she’s like to give her a send off. Meanwhile Todd masks his guilt.

Will he tell her the truth?