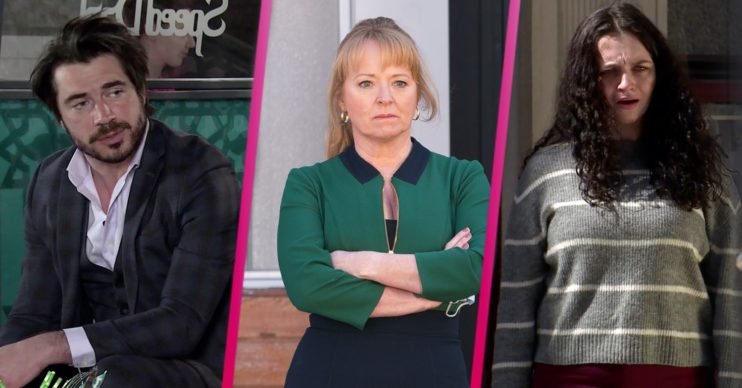 Meanwhile Daniel makes a suggestion and Nina is hurt to realise Abi doesn’t want her at Seb’s funeral.

Sharon tells Gemma that she has decided to move back home and Gemma insists on meeting for a leaving drink.

Jenny is suspicious when Sharon tells them of her change of plan.

Johnny and Jenny go to the Bistro for lunch but Jenny is put out to clock Ronnie and Sharon at the next table.

But she’s intrigued when Johnny says he knows Sharon from the prison and has no knowledge of the mentoring scheme that she claims to be a part of.

When Jenny asks Gary to find out what he can about Harvey, she’s shocked to discover the link between Harvey and Sharon.

Meanwhile Sharon clocks the intimacy between Sharon and Ronnie. She tells Jenny to watch her back.

Peter shares his good news with Adam, that he’s back on the transplant list.

Carla does her best to appear upbeat, but it’s clear she’s worried about him.

Daniel and Adam soon go for lunch in Speed Daal. Daniel persuades a reluctant Adam that they should offer themselves up as liver donors for Peter.

When George reveals that it’s Seb’s funeral tomorrow, Nina is deeply hurt to realise Abi has kept it from her and clearly doesn’t want her there. Asha feels for her.

Soon Asha meets up with Corey and makes out she misses him.

He tries to convince her to spend the afternoon in the empty flat upstairs.

She assures Corey that she hopes they can be together again one day, but for now they’re better off as mates.

Sally is annoyed to see Tim tucking into a full English breakfast.

She reminds Elaine about his heart condition and Elaine’s chastened.

As Evelyn lists the chores she has planned for her, Bernie is forced to bite her tongue.

When Dev spots Elaine putting the washing out in the back yard, he’s amused and points out her injured leg is clearly much better and Evelyn is furious.

Dev admits to Bernie that Evelyn has had them over and there’s nothing wrong with her leg.

Bernie is furious and vows to get even.