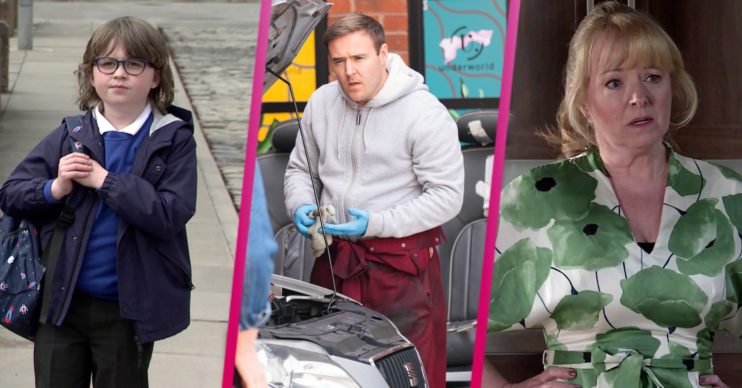 Meanwhile Fiz learns about Tyrone and Alina’s plan and Ronnie agrees to keep his distance from the pub.

When Natasha discovers from Sam that he’s been in touch with Nick, she confiscates his phone.

Meanwhile Sharon clocks that Sam and Natasha are going to Gail’s for dinner later and she tips off Harvey, sneakily taking a photo of Sam that she shows to Harvey’s sidekick.

As Sam approaches No.8, he’s lured into the van. Soon the door is slammed shut and the van drives off with Sam inside.

A worried Natasha calls at No.8 and tells Shona and Sarah that Sam has gone missing and she can’t call him because she took his phone off him.

Meanwhile at the hideout Nick and Leanne are told the news that Sam has gone missing.

Alina tells Emma about her and Tyrone’s plan to buy the salon flat, but assures her she’s welcome to stay for as along as she likes.

Emma reveals Tyrone and Alina’s plan to buy the salon flat to Fiz. How will she react?

Jenny is left in an awkward situation

Johnny assures Daisy that he loves Jenny and he knows he hasn’t been the best husband but intends to make it up to her.

Ronnie agrees to keep his distance but both Ronnie and Jenny are troubled when Ed insists that Johnny go back to No.3 for a game of dominoes.

Meanwhile Jenny is uncomfortable when Fiz comes into the pub and pours her heart out about Tyrone’s affair.

At No.6, Yasmeen and Elaine survey a pile of empty pizza boxes with revulsion.

Clearly Cathy has no intention of going anywhere and soon takes delivery of an exercise bike.

Steve admits how embarrassing it was to come last in his charity bike ride. But Emma points out that he’s raised a fortune for Oliver’s fund and that’s all that matters.