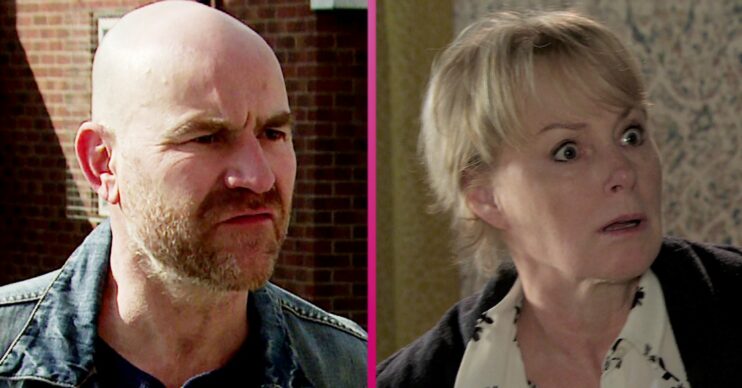 Coronation Street spoilers tonight: Tim assaults a neighbour in a fit of rage

Is Tim in trouble?

Coronation Street spoilers for tonight (Friday, May 20 2022) reveal Tim hits Ronnie when he overhears a conversation he’s having with Sally.

Meanwhile Daniel decides to give up teaching, and Eileen is shocked to find Jacob in her house just in a towel.

Coronation Street spoilers: Tim assaults a neighbour in a fit of rage

Meanwhile Sally and Ronnie walk by No.1 and Tim overhears their conversation.

Ronnie tells Sally that he’s sorry her and Tim’s romantic getaway was such a flop. When Tim hears this, he jumps to the wrong conclusion.

Tim approaches Ronnie and punches him in the face.

At school Daniel tells Mrs Crawshaw that he doesn’t think he’s cut out for teaching.

In the Rovers, Daniel reveals that he’s decided to give up teaching.

Hearing this, David is thrilled and reckons it’s the best news he’s heard in ages.

Back at the flat, Daniel tells Nicky how he doesn’t deserve to be a teacher.

Soon Nicky suggests to Daniel that they could have a future together. But how will Daniel react?

Eileen finds Jacob in her house

Amy and Jacob worry about their broken boiler and where they’re going to get a shower.

Meanwhile Mary realises she left Tracy’s order book at home. Jacob offers to go and get it for her.

Jacob goes to Eileen’s, but when Eileen returns home she’s shocked to find Jacob only wearing a towel, having just had a shower.

Eileen screams and threatens to call the police.

How will Jacob get out of this one?

Gail and Eileen pay their respects

Gail and Eileen put their differences aside for once as they place flowers by the Arena memorial bench to pay their respects and mark the 5th anniversary of so many lives lost.

Meanwhile Tyrone is with Hope and Ruby when he spots Phill in Victoria Garden handing a bloke a large envelope.

Aware Phill is meant to be in Leeds, Tyrone is intrigued.

What is Phill up to?