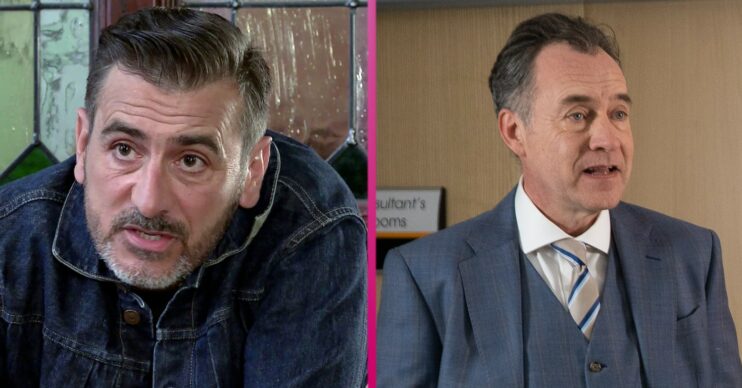 Peter finds out what Mr Thorne has done

Coronation Street spoilers for tonight (Monday, May 9 2022) reveal Peter is arrested for assault.

Meanwhile Summer is left heartbroken after opening up to Aaron, and Jacob impersonates Kirk at work.

When Peter and Carla find out what Mr Thorne did during his surgery, Peter angrily demands an apology.

Peter declares that he’s going to put a stop to his abuse of power.

Mr Thorne decides to wind Peter up and he soon loses his temper.

Peter punches Mr Thorne in a fit of rage.

It’s not long bef0re the police turn up and arrest Peter on suspicion of assault.

Later Peter is charged with assault.

Later when he suggests to Summer that they could give their relationship another go, Summer admits she’s met someone else.

Summer meets up with Aaron from the diabetic support group.

She begins to tell him about her bulimia.

Aaron is taken aback and Summer worries that she’s scared him off.

Kelly finds Seb in the memorial garden. Is Abi okay?

Later Kelly implores Imran to check with Ben about exactly what he saw as Abi is adamant that no drugs changed hands.

Imran promises to look into it.

George has a confession

George reveals that he’s suffering from sleep apnea and shows Eileen the mask the doctor has given him.

Will it help with his snoring?

Meanwhile Sarah tells Kirk that form now on all he has to do is answer the phone.

He efficiently takes a client’s order and it seems to be a success.

Later Sarah tells Carla that Kirk secured a huge order with Danny Mintoff, who’s been giving them the run-around for years.

What does this mean for Kirk and Jacob?