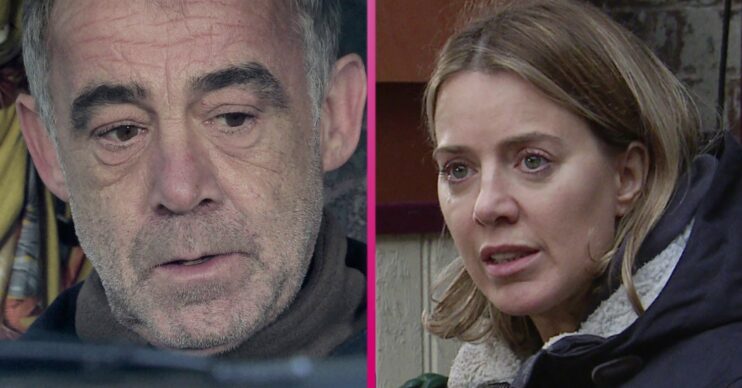 Kevin gets a shock

Meanwhile Lydia continues to cause problems and Stu tricks Tracy.

While Kevin and Jack show Alex around the rented campervan, Abi begs Sally not to tell Kevin about her infidelity.

Sally refuses to make any promises. With the adoption hearing about to start, Abi calls Sally and leaves her a message, begging her not to tell Kevin.

The social worker gives Abi a glowing report, but when the judge rules to reconvene on March 14, Kevin and Abi are disappointed.

Meanwhile, in the factory Sally listens to Abi’s message. Abi takes a call from Sally unaware her phone is connected to the bluetooth speaker in the camper van.

Having heard their conversation, Kevin reels in shock.

Soon Kevin leaps into the camper van and roars off down the street.

Lydia turns on the waterworks in front of Sean and makes out it’s man trouble.

Sean offers to have a word with Sarah.

Meanwhile, Imran shows Adam a series of online reviews, slating him as a solicitor.

Later Sarah tells Lydia about the online abuse Adam is being subjected to.

Lydia makes out to Sarah that her ex won’t stop hounding her with texts.

Outside Victoria Court, Lydia listens intrigued as Sarah and Adam row over her.

As Dev surveys his stock delivery, he’s annoyed to realise they’ve given him some cheap, nasty wine by mistake.

Stu offers to buy it off him, having a plan in mind.

Stu drops the case of wine off at No.1, making out it was delivered to the wrong house and heads off, grinning to himself.

Later Tracy sets out the bottles of wine that Ken bought her on the table and invites Steve and Mary to join her for a tasting session.

At No.1, Tracy, Steve and Mary struggle with the disgusting selection of wines on offer.

Meanwhile, Stu explains to Yasmeen that he’s bought her a brazier. Thinking he said “brassiere”, Yasmeen is taken aback.

As they warm themselves in front of the new brazier, Stu pours Yasmeen a mug of Ken’s posh wine.

Linda and Bernie fight over Joseph

Chesney beg Joseph to reconsider living with Linda. In the Rovers, Gemma accidentally lets slip that Joseph wants to live with her.

Later Izzy has a go at Linda for trying to take Joseph away from his family.

In the pub, Bernie and Linda trade insults while Fergus tries, but fails to keep the peace.

Amy and Jacob get back together

Meanwhile a loved-up Amy and Jacob share a kiss and agree to carry on seeing each other in secret.

But will Tracy and Steve find out?