Jenny gets a shock

Coronation Street spoilers for tonight reveal Jenny finds out the truth about Leo.

Meanwhile Bernie is hauled in for police questioning, and Emma and Faye get shocking news about Ted’s death.

Coronation Street spoilers: Bernie is taken for questioning by police

Bernie slips Joseph the video game he wanted, making him promise not to show Gemma and his dad.

When Evelyn finds it she’s convinced he’s stolen it, prompting Bernie to admit she bought it for him with her pay rise from Dev.

However this makes Evelyn furious, thinking Dev has given Bernie a pay rise.

Later Bernie denies she had anything to do with Joseph disappearance. However Evelyn doesn’t believe her and calls the police.

Bernie breaks down and tells them everything and both Bernie and Chesney are hauled in for questioning by police.

Coronation Street spoilers: Jenny finds out the truth about Leo?

When Jenny gets a call to say Leo has been injured playing rugby she is shocked and rushes to A&E.

However she gets an even bigger shock when she arrives. Is she about to find out the truth about Leo?

Later Carla apologises and tells Jenny it’s clear Leo makes her happy and she should go for it.

Jenny helps Leo in with his bags and explains to Daisy that he’s moving in.

Sally and Faye visit Tim. When Sally reveals the developers are refusing to back her campaign because of the article in the Gazette, Faye wonders if another candidate provided the picture to cupper her election chances.

Sally is furious and reckons Faye is right. She soon approaches Maria.

Later Sally sends the Gazette a picture with her 4×4 gas guzzler.

When Maria reveals that is was Councillor Cameron who provided the Gazette with compromising pictures of her, Sally is shocked.

Sally promises Tim that she’s going to stop politics and focus on him and Tim is sceptical.

When Daniel finds out from Sarah how Daisy sang his praises to Lydia, he is taken aback.

In the Rovers, Daniel thanks Daisy for her kind words.

When Daisy suggests they go for a drink sometime, Daniel is shocked.  Soon Lydia arrives and clocks the spark between them.

Emma and Faye get horrific news 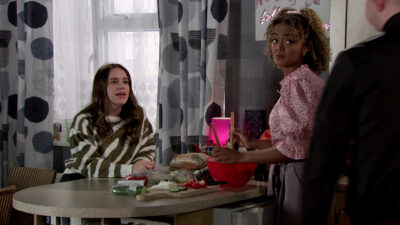 When Emma reveals it’s Ted’s funeral tomorrow, Faye reckons it’s a good sign as the police must have released his body.

Craig returns home and reveals that Ted’s post-mortem suggests he was run over which might have triggered the blood clot that killed him.

Faye and Emma are horrified by the news.