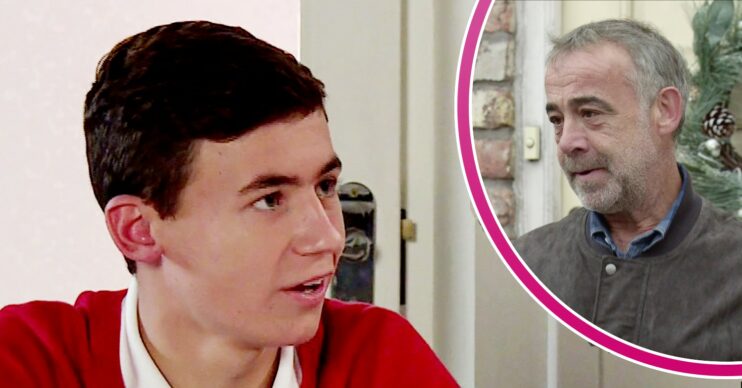 Kevin is struggling to juggle everything

Coronation Street spoilers for tonight (Monday, July 25 2022) reveal that Jack makes a confession to Kevin as he feels like he’s being pushed aside.

Meanwhile Stu manages to find his daughter Bridget, but it’s not the reunion he hoped for.

All this and more in tonight’s episode of Corrie.

Meanwhile at school Jack is being bullied and after the kids find out that it was believed he was Tyrone’s son when he was a baby.

They call him ‘spanner’ saying he has two kids who are mechanics.

In the garage Kevin gets a call from the school and heads out, clearly furious.

When he gets to the school, Kevin is shocked to find out Jack punched his classmate Nathan.

Jack explains that Nathan was picking on him after he found out that Tyrone initially thought he was his dad.

Aaron realises Kevin has a lot going on and offers to take over the work on Stephen’s car and Kevin is grateful for his help.

At No.13 Jack rows with Kevin and admits he’s not looking forward to Abi’s return home as he barely has any time for him as it is.

Stu is furious and has a go at Yasmeen for interfering when he discovers she has found Bridget’s address.

But when Kelly urges him to try and make contact with his daughter, Stu decides to give it a try.

Later he goes to Bridget’s address and knocks on the door. But when she sees him, she panics and orders him to leave.

Stu begs her to hear him out and assures her that he wouldn’t hurt anyone.

Back on the street, Stu apologises to Yasmeen for snapping and says it was the wrong address.

But what is he hiding?

Meanwhile Stephen begins flirting with Yasmeen but she makes it clear to Stu that she’s interest in him, not Stephen.

After a celebratory dinner at the Bistro, the family returns home and Hope opens her tablet to see a string of messages from a player on her game called Mad Dog.

Using their walkie-talkies, Hope and Sam talk about Mad Dog. Sam reckons Mad Dog fancies her, but who is he? Could Hope be in danger?

Summer gets a job

Jacob hears about Summer’s plans and offers to put in a good word for her at the factory.

Later Carla gives Summer an interview for the personal assistant job and offers it to her.

The psychiatry liasion officer visits Audrey and gently quizzes her about why she took so many sleeping pills.

As Audrey leaves the hospital, she’s delighted when she gets a call from Stephen telling her that he’s back.

But later in the Rovers Ed lets slip that he saw Audrey at the hospital, leaving Sarah concerned.