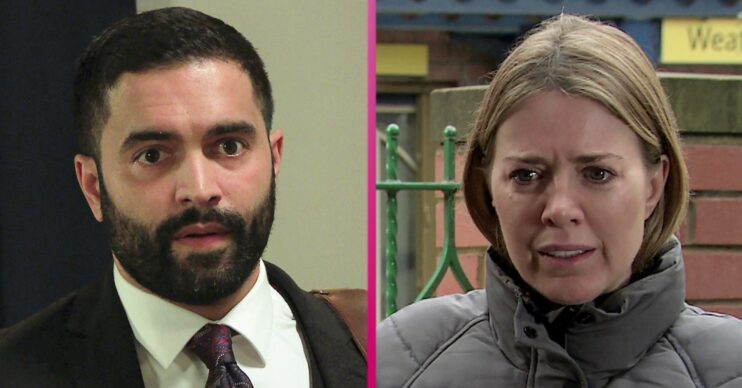 Coronation Street spoilers for tonight (Friday, May 13 2022) reveal Abi finds Ben buying drugs and tries to get him to confess to lying in court.

Meanwhile Peter is determined to expose Mr Thorne’s unethical medical practises, and it looks like there could still be a spark between Fiz and Tyrone.

Abi follows Ben and films him as he buys drugs.

However Ben soon clocks Abi and goes after her.

Abi gives Ben a choice telling him he either needs to admit that Imran paid him to lie in court about witnessing her buying drugs, or she’ll share the video of him buying drugs to his boss and the police.

What will Ben decide to do?

Will he tell the truth about Imran?

Peter calls the Gazette and asks them to run an article on Mr Thorne’s unethical medical practises.

Peter later asks Aggie to dig through the NHS records and provide him with any information which might incriminate Mr Thorne.

Aggie explains that she can’t afford to risk her job, but will she decide to help?

Is there still a spark between Fiz and Tyrone?

When Tyrone offers Fiz a lift home, she is touched and admits that she never had trouble getting home when she lived at No.9.

As Tyrone pulls up outside Fiz’s new house, she offers to show him around.

Is there still a spark between the pair?

Sally offers to accompany Tim to his doctor’s appointment, but he insists he wants to go on his own.

Kirk finds Tim loitering outside of the medical centre and tries to talk to him.

However Tim makes an excuse and does a runner.

He lies to Sally, making out that the doctor said his condition is nothing to worry about and perfectly normal after a major operation.

Meanwhile Summer is still thinking about Aaron after he broke things off with her.

She tries to call him but it goes straight to voicemail.