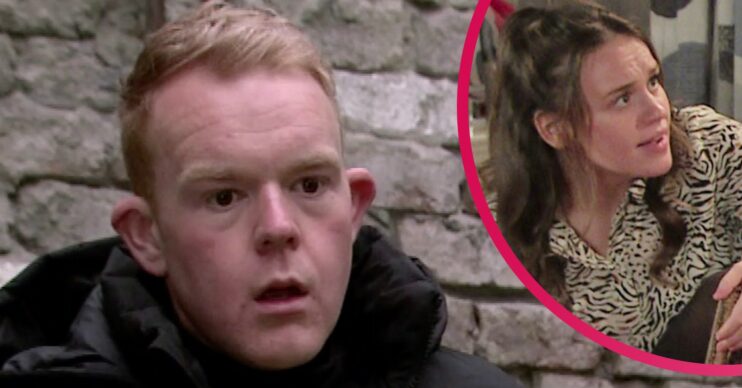 Meanwhile Sally confronts Tim and Amy is suspended from school.

An upset Sally is convinced Tim is hiding something from her.

Meanwhile Peter urges Tim to come clean but he pays George a visit.

When Eileen discovers what’s going on Tim swears her to secrecy. Later Sally is bemused when she sees Tim with Adam.

Kevin advises Sally to speak to Tim rather than letting her imagination run away with her.

Sally confronts Tim and asks him if he’s having an affair. He denies it but when he refuses to hug her she finds his denial hard to believe and later puts a tracker on his phone.

When Dev reveals that he donated £3k to Joseph’s appeal Gemma and Bernie are genuinely touched.

Later Bernie calls in at the shop and asks him to give her first refusal on any stock that he’s about to chuck.

When Dev suggests they have a night out, Bernie pulls him in for a kiss.

At the bus stop, Amy tells Summer, Asha and Aadi that she’s done some digging and it would seem several other girls have been upskirted and harassed.

Summer begs her to drop it, but Amy is clearly on a mission.

At the school, a crowd gathers to watch Amy spray paining the words ‘Stop Protecting Sex Offenders’ onto the side of a building.

Mrs Crawshaw summons Tracy and Amy to a meeting and explains that she has no choice but to suspend Amy for wilfully damaging school property.

Tracy blames Summer for failing to report the incident in the first place.

Summer meets up with Aadi, Asha and Amy in Speed Daal and shows them the open letter she’s written on Insta in support of Amy.

In the salon flat, a bored Craig watches the street through a set of binoculars.

As Craig looks out of the window, he’s shocked by what he sees.

In Speed Daal, Alya tells Yasmeen she’s proud of her for donating the £30k to Joseph’s appeal.

Later Yasmeen finds a note from Alya. As she reads it, it’s clear she’s fighting her emotions.