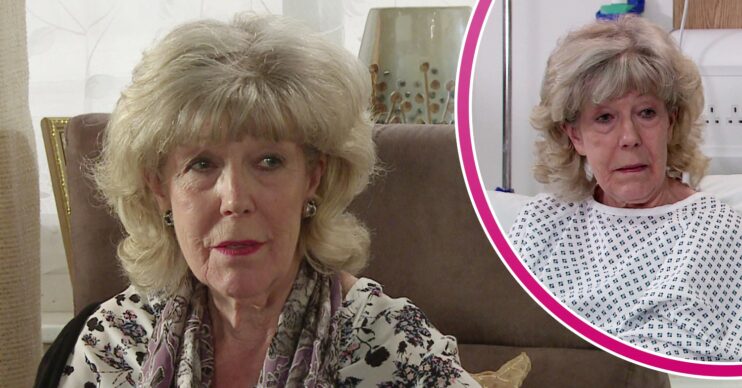 Coronation Street spoilers for tonight (Friday, July 22 2022) reveal Audrey goes to hospital but hides it from her family.

Meanwhile it looks like Phill is about to find out the truth about Tyrone and Fiz.

Coronation Street spoilers: Audrey taken to hospital on her birthday

Audrey is underwhelmed by her family birthday meal.

Later they take her to show her their surprise. They reveal that they’ve signed the rental agreement with Debbie and her old salon is now hers again.

Gail calls Audrey later, worried that she didn’t seem herself during the day.

Audrey assures her that it’s nothing that a good night’s sleep won’t fix.

However she doesn’t mention that she’s lying in a hospital bed. Will she be okay?

Phill finds out the truth?

Fiz confirms that she’s meeting Phill in the café as he’s promised to sign the annulment form today.

But she gets a shock when he asks if she’ll come to a couples therapy session with him.

Things get even worse when she realises he’s taken her to the same therapist she’s seeing with Tyrone.

Later Evelyn tries to have a chat with Phill but he’s distracted when he realises he left his phone at the therapist’s office.

Fiz and Tyrone go to the therapist for their session and she makes it clear she’s not impressed with their lies and deceit.

Suddenly there’s a knock on the door and Phill appears, looking for his phone.

What will Fiz and Tyrone tell him? Will Phill sign the annulment forms?

After some wise words from Evelyn, it looks like Phill will sign the forms, but a farewell chat with Hope puts a different light on things.

When Zeedan takes a call from a mate inviting him to Athens for the week, Stu offers to cover for him and reveals he has his own happy memories in Athens.

Later Stu tells Yasmeen about the family holidays he had in Athens.

Yasmeen encourages him not to give up on his daughter and try and track her down.

She soon confides in Zeedan that she’s taken it upon herself to try and find Stu’s daughter.

Kevin starts tidying the house for Abi’s visit. When Jack asks for help with his leavers’ personation speech, Kevin tells him he doesn’t have time.

Jack starts to feel left out by his dad.

Later Abi and Alfie visit Kevin and Jack at No.13.

Kevin is overcome with emotion when Abi reveals that if everything goes to plan, they can move back in next week.

In the flat, a shaky Kelly questions Gary about his intention to kill Kieron.

Gary assures her that he was simply protecting her.

Later Kelly tells Aadi that she’s sorry she stood him up but something happened.

She says she wants to try again.

Will he give her a chance?