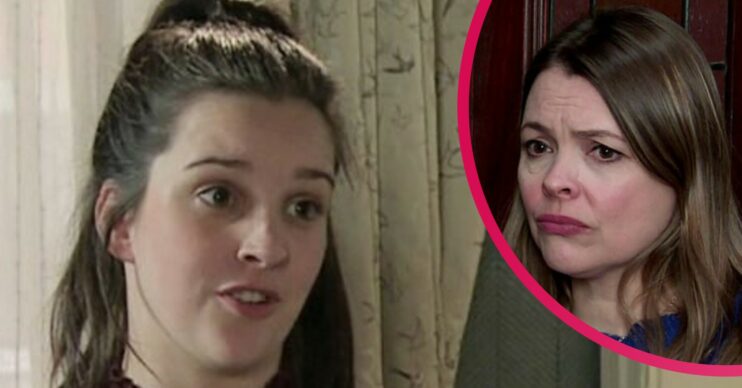 But will she come clean to Steve and Tracy?

As she celebrates her 18th birthday, she’s still hiding a big secret from her parents over who she’s dating.

Viewers will find out the truth tonight – but will Tracy and Steve cotton on?

Also, Sarah is targeted by Adam’s stalker, and Gary and Maria are worried sick about Kelly.

All this and more in tonight’s Coronation Street spoilers.

It’s Amy’s 18th birthday and as Steve, Tracy, Emma and Carla set up a surprise party in the bistro for her, she’s back at home getting cosy with her fella.

Steve and Tracy pop home as they’ve forgotten candles for Amy’s cake. But they’re shocked to find the chain on the door.

They can see movement inside and Steve races to the back to tackle the ‘burglar’.

As Tracy calls the police, they’re shocked to see Steve has pinned Jacob to the ground.

Jacob protest his innocence, but Steve makes sure he’s carted off by the cops.

Meanwhile, Amy hears what has happened and making out she wants some peace and quiet, sends her parents to the Rovers.

But she secretly makes a call to the station, clearing Jacob’s name.

When he’s released without charge, the pair share a kiss: he’s her secret man.

Will she come clean to Steve and Tracy?

Adam covers when he receives an anonymous call and insists to Imran it’ll all die down soon and he doesn’t need to make a fuss.

When Sarah arrives home later on she’s thrilled to find flowers from Adam on the kitchen counter.

However, Adam reveals he didn’t send them and the couple panic as the door was deadlocked.

Fishing out the card, the threat reads: “Next bouquet will be for your funeral”.

Adam finally agrees to call the police and orders Sarah and Harry to stay with Nick.

Peter joins Adam to keep him company and Adam gets more calls. Peter tells him not to answer.

As Adam ignores the call, his tormentor stares at the screen… Who is behind this campaign?

Kelly back on drugs?

Kelly tells Gary and Maria she’s ill and can’t got to school.

But when Kirk mentions he saw Kelly out late the previous night, Gary worries she’s back on drugs.

Gary confronts her with his theory and Kelly is fuming.

Will she confess what’s really going on?

Nina makes an appointment to see the doctor about her anxiety.

Roy offers to go with her.

Although Nina is put on the waiting list for counselling, she is told she must tackle her anxiety herself in the meantime.

Can Roy help her do that?