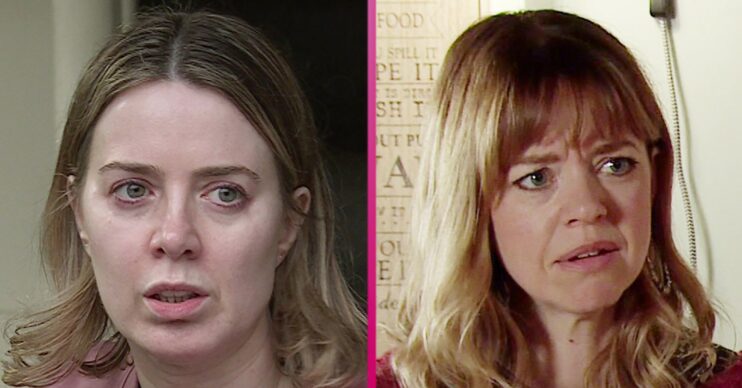 Has Abi completely given up?

Coronation Street spoilers for tonight (Friday, March 11) reveal Abi turns to drugs after giving up on gaining custody of her son.

Meanwhile, Nicky returns and drops Daisy in it with Daniel, and Laura and Gary meet with a PI to find Rick.

Abi is woken by the sound of two police officers banging on the front door.

Having shown the officers out, Abi goes to score more drugs.

Will she get the wake-up call she needs to fight for her son?

Meanwhile Nicky finds Daniel at school and reveals she got fed up with Lytham and decided to return to Weatherfield. She also tells him she’s applied for a teaching assistant role at the school.

Daniel’s delighted and agrees to meet for a drink.

He introduces Nicky to Daisy, but she reveals she’s already met Daisy and she told her he’d moved down south.

Over their drink, Nicky tells Daniel she left him a voicemail but he never replied. Daniel suspects Daisy might have something to do with the missing voicemail.

Laura and Gary meet with the PI and Laura explains she’s trying to track down Rick.

She explains Gary was the last person to see Rick. Worried, Gary starts to sweat as the PI quizzes him about his relationship with Rick.

Michael gives up looking for Grace

When Michael announces he’s given up the search for Grace, Ed and Aggie share a look of relief.

Read more: Emma Brooker in Coronation Street: Who is she? Who is her dad?

Leanne makes out Sam has an after school club, Nick’s pleased to think he’s mingling with kids his own age.

Later in the café, Leanne watches as Roy plays chess with Sam. Will Nick find out the truth?