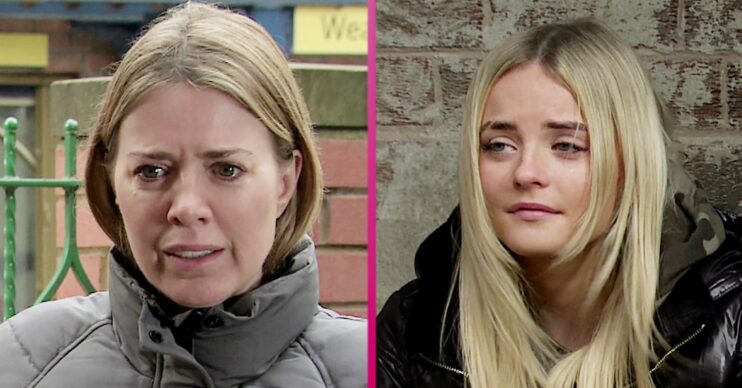 Coronation Street spoilers tonight: Abi in danger of losing Alfie as she gets caught up in drugs again?

Kelly struggles to deal with her mum's death

Coronation Street spoilers for tonight (Monday, April 11 2022) reveal Abi steps in to help Kelly as she goes to take morphine, but could this land her in trouble?

Kelly tries to come to terms with her mum’s death, but she’s overwhelmed when she learns she stands to inherit everything from her dad, including the family home she grew up in.

She asks Gary if he can go check out the house for her.

At the neglected house Gary is faced with a smiling photo of Rick. He packs up some of Kelly’s things to take back to her.

As Kelly looks at the reminders of her childhood, she’s overcome with emotion and hurries out of the flat.

She sits alone in Victoria Garden, numb with misery.

Kelly takes out her mum’s little bottle of morphine from her pocket and unscrews the top just as Abi arrives.

Abi steps in but could this affect her trying to get custody of her son Alfie?

Meanwhile Toyah is heart broken as she leaves Elsie with the social worker.

Having drowned her sorrows she drunkenly heads to the solicitors to have it out with Imran.

When she arrives, Adam tells her he’s gone to visit Alfie.

Imran returns to the office and asks her to let him put things right, but she leaves him in no doubt about how she feels.

Sam goes to Nick for advice

A smitten Sam admits to Hope and Roy that he likes his new chess opponent, Jalena.

Roy suggests to Sam that he speaks to his dad about how he feels. When Sam tells him, Nick is chuffed to help out and give some fatherly advice.

Daniel attends a meeting about a school trip with Mrs Crawshaw, but he’s taken aback when she breaks down in tears and confides that her husband has left her.

Daniel offers to take over planning the Edinburgh trip and is pleased when Nicky offers to help. How will Daisy take the news?

Michael and Faye compete for a bonus

In the factory, Sarah explains to Michael and Faye that they desperately need more orders and they’re offering a weekly bonus to the person with the best sales figures.

Who will get the money?