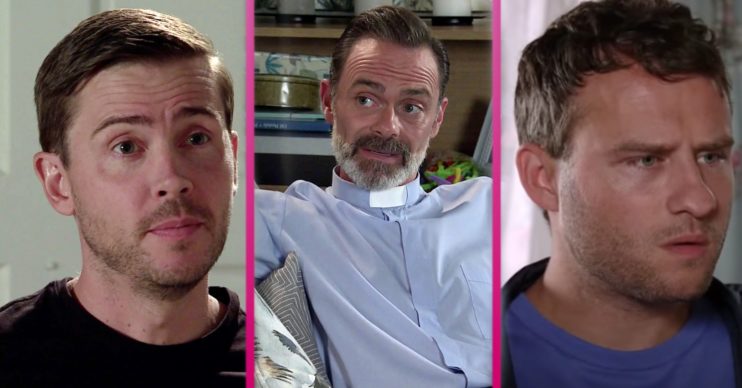 Billy and Todd haven't seen each other in three years

In next week’s episodes, Eileen decides to call Mick at home using Street Cars number and threatens him with the police, but she just makes matters worse.

Mick’s husband Erik picks up the phone and soon turns up at Street Cars accusing a dumbfounded Tim of having an affair with Mick.

Meanwhile, Mary is convinced the noises in the attic are the ghost of Pat Phelan. Worried, she gets Billy to perform an exorcism.

Read More: Coronation Street: When is Sean’s son Dylan returning? Who will play him?

But when Todd suddenly appears at the top of the stairs, they both stare open-mouthed.

Eileen sees Eric and Tim rowing in the street over Mick.

Back at home, Billy berates Todd for abandoning Summer three years ago and letting her think he was dead.

Eileen defuses the situation with Tim and Erik and says it was her who called, not Tim.

As the commotion escalates, Paul heads over to Eileen’s. But Todd sees an opportunity to cause trouble for Billy and Paul.

Billy assures his partner that he loves him with all his heart and that Todd is bad news and he’s well rid of him.

Meanwhile, Eileen reads Mick the riot act and tells him Todd isn’t worth his time or energy. Will he agree to end their feud?

Despite Eileen warning Todd that a lot of people won’t be happy to see him back, he heads out with a spring in his step.

However across the street, Billy confides in Paul that he’s getting cold feet about the archdeacon position. Paul worries that Todd’s return has caused Billy to change his mind.

Todd continues to wind Paul up and takes great delight in it. But when Billy tells him to stop causing problems, Todd admits he still has feelings for him.

Todd reminds the vicar how good they were together and suggests that he doesn’t really want to be with Paul.

Billy refuses to be swayed, but as he heads out, his eyes fill with tears.

Later, Todd offers Paul a hollow apology. However when Todd lets on that Billy has told him what a tough time Paul has had, Paul is furious.

Billy assures him he hasn’t said anything about Kel.

Later Billy continues to assure Paul that Todd was the love of his life but isn’t anymore. But the factory worker remains unconvinced, worried Billy has settled for second best.

Soon Sean arrives home with his son, Dylan, and is shocked to see Todd is there.

When Billy reveals he postponed his interview for the archdeacon position, Paul asserts that’s what Todd wants and gets him to call and tell them he’s on his way.

But soon Sean comes back home and is in a tizz having lost Dylan.

Todd and Sean head out to look for Dylan and it’s not long before Todd finds him. He assures Dylan that his dad loves him and Sean’s grateful.

Billy and Paul return from the interview. But as Billy bangs on about how manipulative his ex is, Paul points out he’s clearly got under his skin.